Another picket planned outside the Continental

On Dec. 10, a group organized by The ANSWER Coalition demonstrated outside the Continental on Third Avenue for what they say are acts of bias by the bar’s bouncers against African-American patrons ... there is a flyer taped to a streetlight near the bar with details of another picket ... on Jan. 29 from 8-10 p.m. 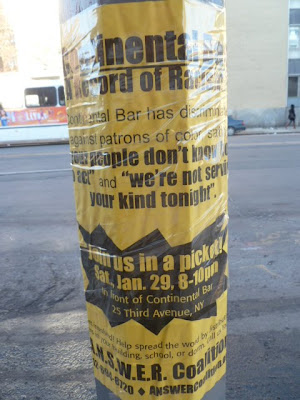 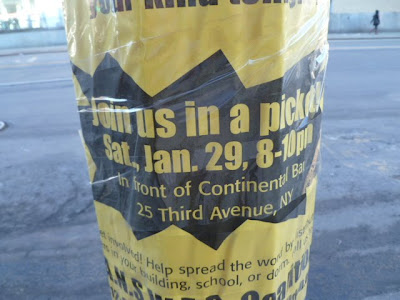 Bar owner Trigger Smith denied the allegations, telling the Local East Village that patrons were not being turned away because of the color of their skin but because the bar has a policy against admitting patrons who do not adhere to its unwritten dress code.

“It just so happens that more people of a certain minority wear these things than others. But I don’t want white trash either, or Jersey Shore boys.”

Previously on EV Grieve:
Patrons accuse the Continental of discrimination
Posted by Grieve at 6:45 AM

Will Mr. Penley support this ACTION?

His quote is exactly right. The racist ones are the fucking pigs that are protesting. Being black doesn't mean dress like a rap thug. People who dress like rap thugs cause problems. Nothing to do with being black, and if you think so, you're racist and it's quite sad to think that you feel dark skin means you should dress a certain way.

We should boycott assholes.