Protest outside the Continental Saturday night 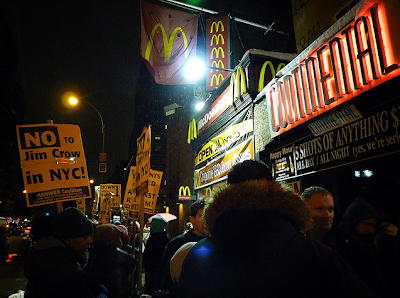 On Saturday night, a group organized by The ANSWER Coalition demonstrated outside the Continental on Third Avenue for what they say are discriminatory acts by the bar’s bouncers.

Bar owner Trigger Smith has denied the allegations, telling the Local East Village on Jan. 21 that patrons were not being turned away because of the color of their skin but because the bar has a policy against admitting patrons who do not adhere to its unwritten dress code. “There’s not a prejudiced bone in my body,” he said.

According to the Facebook group called Boycott Continental Bar in NYC, "the ANSWER Coalition has collected testimony from more than 30 people who claim to have been met with racism or bigotry at the Continental Bar. When the Continental managers were asked by ANSWER Coalition organizers to address these complaints, they refused. Now the New York City Commission on Human Rights is investigating the charges." (Read more on that investigation here.)

While Smith told the Local EV that he would not speak with members of the Answer Coalition, he is cooperating with the Commission's investigation. Smith said that he expected more demonstrations and more investigations because he plans to continue his unwritten dress code of “no baggy, saggy jeans.”

Photo from Saturday night by Vivienne Gucwa via her Flickr page. Reprinted with permission.

Previously on EV Grieve:
Another picket planned outside the Continental

Patrons accuse the Continental of discrimination
Posted by Grieve at 6:45 AM

"“There’s not a prejudiced bone in my body,” he said."

No, it's true. He stores all the racism in his muscle tissue.

I'm shocked. Shocked to see this kind of initiative and organization from a would-be Continental patron. I just assumed anyone who would want to enter this bar was a complete loser and waste of space.

Maybe they should just require everyone to wear jeggings.

this is so true!!! they are so racest over there >> im an all white clean cut italian kid that goes to nyu and everytime i go there i wear mad baggy clothes and my pants are always sagging>>.and in the summer i wore sleevless shirts and shorts and while i was there aspanish kid wasnt alloud in for wearing shorts and a hat. and i remember thinking that they didnt even say anything to me>...

i thought at the time maybe because i was with a group of cute girls>.

Black people do not dress a certain way, they are just people. Not wanting baggy pants and all that thug shit is NOT racist. If you think so, you are the racist.
Too bad if a lot of black people wear that shit, it's not because of the color of their skin.

my husband who is puerto-rican had a similar experience here last summer. He went out with my brothers (chinese) and was the only one refused at the door for wearing jeans (not baggy) and a button-down shirt. Meanwhile, my brothers were wearing casual shirts, shorts with flipflops! A bunch of causcasian guys were also walking in with t-shirts and jeans. Unfortunately, my husband deals with this issue in many bars and lounges wherever we go, even in a city as diverse as new york. A couple years ago, we chatted up a bouncer at One and One who actually told us that his boss makes him turn away "guys that look like" my husband. Sad but just something we have come to expect when we go out together and he is the only one rejected at the door for some made-up "dress code".

I've never been to continental- but the worst bouncers I've experienced (and I never go to this part of town but it was someone's birthday) was at the Marquee.

A dress code is completely reasonable, as long as it is consistently enforced. (In fact, I wish more NYC places had dress codes).