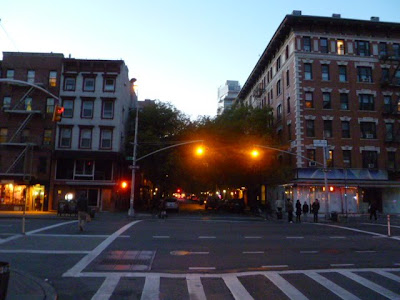 However, as Grub Street reported on March 25, the folks behind Dempsey's and Sláinte are taking over the Kurve/Rhong Tiam space across the street from Sin Sin.

Owner Tom O'Byrne is planning on a craft-beer-focused bar-restaurant called Coopers. "The food will be in the American comfort-food mode with some twisted-up Irish dishes mixed in for good measure," he told Grub Street.

O'Byrne has met with members of the East Fifth Street Block Association. While O'Byrne has stressed that he will run an organized and professional establishment, some residents still have concerns about the late hour and yet another bar along that Second Avenue corridor. Currently, the kitchen will stop serving food at midnight, and the bar will close at 3:30 (2 a.m. on weekdays). Which is why Block Association members will be speaking out against approval of a license here during Monday's CB3/SLA meeting. 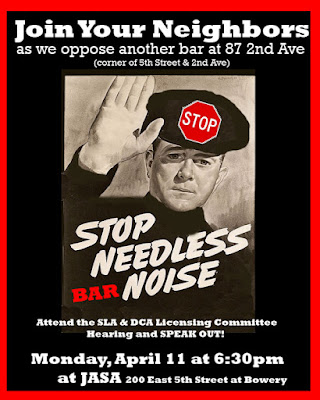 Why the president of the East Fifth Street Block Association carries a baseball bat
Posted by Grieve at 6:50 AM

A craft beer bar? Sounds great to me!

1. They're worried about the place making noise in the late hours, which never happens because the crowds in the East Village thin out considerably after 1am on any night unless you're throwing a concert or running a promoted event.

2. One more bar on Second Avenue, which has noise from cars and trucks and buses almost constantly, is going to increase the overnight ambient noise level in a way that anyone other than people within 100 feet of the front door would notice.

Well I came in here to comment, but Sam T and Brian Van have already said what I was thinking.

These are the same people who ran Mercury Dime out of town (a coffee shop!!) because they wanted to sell wine and stay open til 11pm.

If you don't like noise, move out of the city! This place sounds extremely reasonable and delicious.

Mercury Dime was a coffee place that dreamed of becoming a bar one day. Boo hoo.
And we've fallen for that "No, you dont understand-- we're really a RESTAURANT" BS many times. You're open til 4am? Kitchen closes at midnight? Sorry, not buying it.
At this point, kindly explain how the addition of one more place to get a drink enhances the neighhorhood in which many of us have lived for more than a decade in any conceivable way? Nothing against these owners but they already have 2 bars within staggering distance. Who benefits but them?

The block association should look on the bright side; at least Little Peter's isn't there anymore.

That poster cannot be real. Seriously though, that's a joke poster, right?

@Anonymous: Kindly explain how having an empty store helps anyone?

Kindly explain how having another bar helps anyone?


It does not have to be an either a bar or an empty storefront? If the landlords aren't so greedythen maybe a different kind of business can open up in there. But since the landlords are greedy, only a bar, a bank, or chain store can afford the rent in the East Village or in NYC, for that matter. And right now, I wouldn't mind seeing another bank, frozen yogurt Starbucks open up there. At least they close early, and the patrons would not be screaming WOOOOO when they get out. There are other plenty of bars that a fratboy and douchebag can patronize in the East Village.

Brian Van clearly doesn't leave in the East Village. What's he talking about saying the crowds in the East Village thin out considerably after 1 a.m.? That's not the case on a Friday or a Saturday night anywhere in the neighborhood where there are popular bars. I say this not just as a neighborhood resident but as someone who goes out!

Let's be honest here, Dempsey's and Slainte are two of the best run and least intrusive bars in the whole east village. The owner lives above Dempsey's with his family, and the manager of all of his bars lives on 2nd avenue as well. It's not like these guys have any interest in destroying the neighborhood or disturbing the block. The kinds of people that come out to drink Dogfish Head 90min IPA or some other type of craft beer aren't exactly the types that wind up passed out on the sidewalk causing a ruckus. This hardly sounds like the kind of place where frat boys will be joining Tuesday night beer pong leagues (as none of the owners other bars are either).

Needless to say, the spot could fall into much worse hands than those of the Dempsey's/Slainte group.

I'm sick of Irish bars. What the hell is to celebrate. Who cares. The Irish are the worst nationalists and bigots ever. Your cuisine is not particularly good nor is your beer. Assimilate and serve American beer and food damn it! Your accent sounds dumb :))