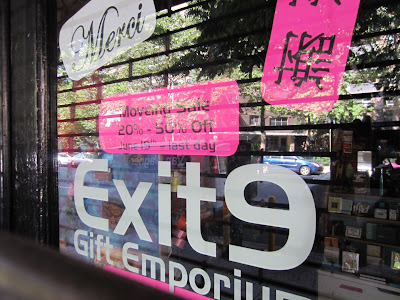 As we reported back on June 2, Exit 9 had announced that it was leaving its home of 16 years on Avenue A. At the time, a commenter said that the gift shop would be moving just down the street.

Yesterday, our friend Jen Doll at Runnin' Scared had the scoop that the shop would open at the former Urban Roots space one block to the south. The new space is expected to be ready in September.

Previously on EV Grieve:
Exit 9 exiting from Avenue A
Posted by Grieve at 6:36 AM

I love this place & its staff. Hope it succeeds in the new spot.

An East Village independent shop moving out and expanding to a larger space in the same neighborhood reads like a miracle story, considering the times.

With more room, I hope they start stocking Demeter fragrances again. They stopped carrying them due to lack of space...no excuses now, guys! (Seriously, love Exit 9, and best of luck to them in their new home.)

They are moving into the vacated Roots groccery store space right down the block on Ave A.