The Economakis Manor isn't the only recently unveiled, newly minted single-family home in the East Village... Here we are over at 64 Seventh Street between Second Avenue and First Avenue. (Or, for coffee fans, between Van Leeuwen and Abraco.) 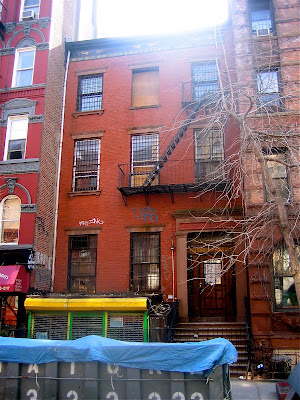 Jeremiah wrote extensively about the history at this address in March 2010. (Read his post at Vanishing New York here.) It has been the Les Deux Megots coffeehouse that attracted everyone from Allen Ginsberg to William F. Buckley Jr. ... as well as the Paradox, the macrobiotic restaurant where Yoko Ono and Loudon Wainwright III both worked...

According to Streeteasy, this 1837 Federal Townhouse was originally part of Peter Stuyvesant's parcel of land. 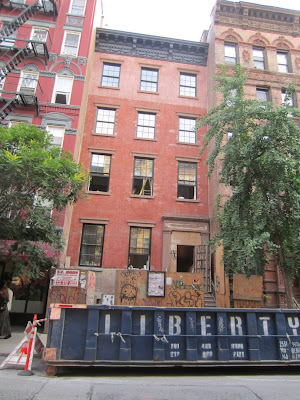 The house is configured with 13 windowed rooms: three interior rooms, a kitchen on the main floor, three bathrooms and four fireplaces.

Meanwhile, we're not sure what kind of welcome wagon the new tenants will receive from neighbors. According to the DOB, there have been 22 complaints filed against 64 Seventh St. in the past 12 months, ranging from "illegal work on Saturdays" to some steel beams used for the additional floor causing some walls to crack at 62 Seventh St.
Posted by Grieve at 7:00 AM

FYI CORRECTION: Per the online NYC land records (ACRIS), the new owner paid $5.3 million (not the $5.7 million that the house was listed for). She also paid cash (no mortgage loan).

Going to be a long time before that place it worth 5.3 mil again. Hope she plans to live there.

At least they're keeping it semi-normal and not building some glassy building! Pick your battles people...

To their credit, they've kept the original look of the building. And, I like that they seem to have moved the original decoration to the top - or is that new? Either way, it looks nice and shows they've put some care and thought into it (no, I do not know the owners).