At Neither More Nor Less, Bob Arihood reports that the NYPD arrested two travelers early this morning after allegedly assaulting two men in front of the McDonald's on Third Avenue. According to witnesses, the two travelers were spanging in front of McDonald's. Two men drinking next door at the Continental struck up a friendly conversation with the travelers, who then reportedly threw punches without any warning.

As Bob noted, a dog that belonged to one of the travelers was left tied up near a tree. See Neither More Nor Less for all the details. 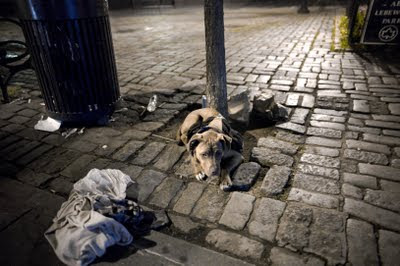 A smart "travelers advisory" for NYC: Always give them a wide berth, but especially when you're half gassed.

Yea - they don't cause any harm. I hope they all get locked up.

holy crap the worst part of this whole thing is that poor puppy! i hope someone went and got him... shit. he's probably in the pound poor thing. sorry, i know it's not hip to dislike the "travelers" aka "stinky, entitled, snotty, lazy drug-addled assholes" but i've seen them cause a lot of ugliness. and let's stop with the "travelers" business right now and all them what they are: lazy beggars.

"Travelers"? Everyone I know who lives/works by the park calls them Crusties. Where did the "traveler" name come from? And doesn't it give a bad name to people who are actually travelers but not panhandlers? I have some friends who have traveled the country for years and they don't fight, don't panhandle, don't do or push drugs. If they need money, they pick up odd jobs. And they're JUST as pierced and tattooed as these TSP transients, so that's not even an excuse.

I 1000% percent agree they are NOT travelers. These people are druggie's that beg people for money all day. And indeed they do give actual travelers a bad name. Instead of travelers I think the word "Scum" fits better.