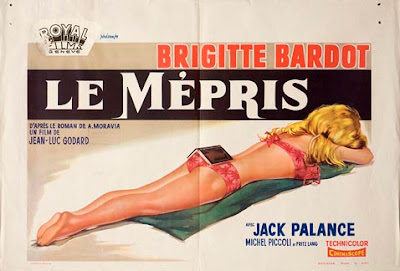 As Esquared alerted us ... someone official postponed last night's free screening of "Contempt" due to the threat of storms and what have you.

The screening is on for tonight...

Parisian screenwriter Paul Javal (Piccoli) and his wife Camilla (Bardot) join director Fritz Lang and American film producer Jeremy Prokosch (Palance) on the set of new film version of The Odyssey in Italy. Camille is not happy about this long journey away from home and among strangers...

[Image via Nonetheless]
Posted by Grieve at 10:15 AM