On this date in EV Grieve history in 2009: At Superdive 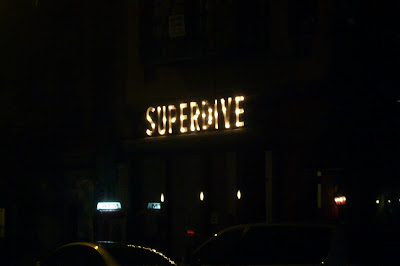 Superdive opened last night at 200 Avenue A. (So it was Thursday the 25th after all!)

A reader sent me a fairly lengthy e-mail early this morning after a night out at Superdive. The reader started off by saying: "Maybe you can excerpt something useful from this, but I don't know. It just wasn't that interesting." We'll be the judge of that!

To the reader's e-mail:

Near the door are some mini kegs stuck in ice. By the window are guys filling mugs from a mini kegerator. Very fratty, all around. Fratty smell, especially.

We try to figure out the bar situation. Confusing. It looks like there is no bar and patrons are just doing whatever, but really there is a bar. It's just surrounded by patrons. We eventually get drinks. My mixed drink is quite strong. This is good, as it took an eternity to get it. It was served by a bartender wearing legwarmers on her arms. As we're trying to secure drinks, we're hit by a blast of flatulence. Did I mention this place is fratty? We get our drinks and head toward the front. The girls here are CUTE.

There is a live band in the back, playing under an enormous lit sign that reads APPLAUSE. The sign is always lit. I do not clap. There is a guy on piano, trying to sing over the noise, and he's accompanied by a drummer. They're playing "When a Man Loves a Woman."

There are plastic cups everywhere.

We go for another round of drinks. We ask how much, and the bartender says "Ummm.... 30?" as if we're bartering. We pay. It seems fair for the amount of drink we're walking away with.

A cringing girlfriend leading her man away from his friends.

A group of girls enter, high-fiving each other. They are cute.

A guy in a yellow shirt starts to lose composure, head in hands. He's had enough beer.

"Thriller" is played (the pianist/drummer are done now). There is cheering, dancing.

And that's about it. We get bored and go for pizza.