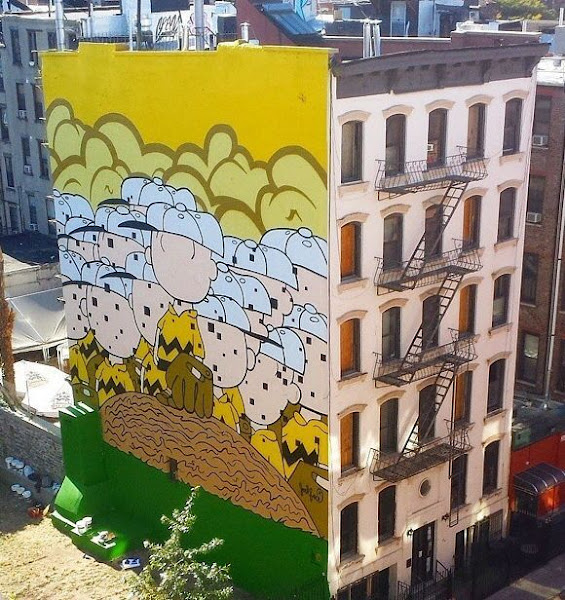 Icon previously announced that they had donated empty retail spaces for Celebrity Catwalk to hold adoption and fundraising events (Icon has been working with Celebrity Catwalk for the past four years) ... and hired a chief safety officer to oversee the construction and renovation work in Icon buildings.

Now Icon has unveiled plans for public art at several of its properties. Here's part of the release via the EVG inbox...

Icon Realty Management is working with local art galleries to create mural art on the sides of some of their buildings. Providing a public platform for artists to exhibit their works for New Yorkers to enjoy and contributing to the art community has been a continued endeavor that Icon has supported throughout the years.

Working with Dorian Grey Gallery in the East Village, Icon will have artists Penn and Lambros paint the side of their Mott Street building. Jeremy Penn is a NYC modern artist who has been exhibited and received honors from curators across museums. Penn uses mixed media to combine materials such as magazines, word plays and mirrors. Lambros is a NYC street artist focused on stencil art and graffiti illustrating recurring themes of power, lust and rebellion. Icon’s 307 Mott Street building has been a rotating art wall for the past four years with works by Jonathan Matas and most recently a mural by Mustart.

Icon is also working with artist Jerkface to paint 128 Second Ave. Jerkface is a NYC-based street artist and Queens native who is known for painting several nostalgia-inducing murals around the City.

“Public art is so important to the character of neighborhoods, especially in the East Village,” said Terrence Lowenberg, Principal at Icon. “As a lifelong New Yorker, art has always been a central part of our City. We are proud to do our part at Icon to continue that tradition. We look forward to doing even more in the future.”

In September 2014, Jerkface painted the faceless Charlie Brown mural on the side of the Icon-owned 402 E 12th St. Icon said that they also donated space on their walls to French street artist Invader, who installed his mosaics at 145 Avenue A, 130 Second Ave. and 133 E. Fourth St., among other buildings not owned by Icon.

Residents, tenant-rights organizations and local elected officials have accused Icon of aggressively displacing rent-regulated tenants with frivolous lawsuits and exposing them to hazardous health and safety threats.
Posted by Grieve at 4:20 AM

Here's a creative artistic idea - restore all the long time residents you've displaced and bring back Roman and The Stage.
Otherwise please can the usurping, interloper bourgeois spiel.

Okay first we take away the homes of EV artist then we try to pull of a PR campaign to show why everything we did was justified as in a painting of your favorite comic strip character from the 1960's which nobody could ever find offensive in its "kidultism" style.

Wish these artists understood the complete damage that Icon has done to its tenants and quality of life in general in the East Village and would refuse to participate in this sham. These are false gestures being made by Icon. You don't get to drive tenants from their homes and then simply paint over it. Icon is scum.

great - donate space for art
good try
what about your current residential tenants? does this mean you'll be a decent, considerate, legal landlord?
or is this just a trumpesque press release?

Talk about a white-wash! There's not enough paint in the world to cover up the shitty things Icon has done (and is still doing) to legitimate tenants in buildings they've bought.

Don't try to pretend you're "nice" Icon, because the preponderance of evidence says otherwise.

"known for painting several nostalgia-inducing murals around the City."

You know what I'm nostalgic for? MY FORMER NEIGHBORS who Icon forced out. Can this artist do a mural depicting them and their eviction? Something biblical: The innocent being driven out by the money-makers.

It really is somewhat akin, albeit very, very distantly, to the genociding of the native Americans -- we'll steal your land but, hey, to show our appreciation we'll dedicate a wing in the local museum to the artifacts of your murdered souls.

Ya know what else is important to the quality of a neighborhood? Tenants that don't act like rabid dicks in their party gardens or on their party roofs at all hours of the day and night. When Icon addresses THAT issue maybe I'll take them seriously. Maybe.

I don't get it...they;re so concerned about their PR but the BASIS of all the issues is not being fixed. Why don't you let ONE business stay without raising their rent 5x, or respect tenants and then we can talk.

any chance you'd reach out to the artist on this topic? I would love to hear what they'd have to say in their defense of selling their talents to such a disgustingly immoral company. (I really wanna reach out but as you can probly sense, I'm a bit biased and angry at them already)

Ok, ICON are you kidding me?? The Upper Rust, The Stage, Dusty Buttons, The Pick Me Up Cafe were all closed by your greed and now Terrance is talking about preserving the character of the neighborhood. This has got to be a joke.

I live in one of your building and have had no gas for a year and have watched my neighbors be kicked out one by one. And for us who remain it continues to be daily harassment. Who do you think you are kidding?? You are killing the East Village!

NOthing will surprise me at this point. Icon could come out with a press release saying 'Icon Realty is your friend. Icon cares about you." Would not surprise me either. Nothing is beneath these people. No statement or gesture too tone deaf or transparently phony. They are practically a different species far as I'm concerned.

I was in Long Island City last weekend and there were flyers for artists open studios sponsored by Steiner and Rock Rose Realty. Ha ha ha.

Don't the artists cooperating with Icon keep up with what's happening in the neighborhood? How can they work with these people?

Part of the problem!

Support artist, but take away their homes. They're so full of B. S. They're just trying to cover their ass. They can suck it. Great P.R. Terrance. Way to go. Your a fake.

Purchasing 97 Second Ave for only $5 million in 2014, what is up with that? 10 units plus the storefront for only that much. There must be a story there.

Preserve the character of the neighborhood? If only that were true. It isn't. We loved all the stores that were evicted from 9th street and Second Avenue. The Stage Restaurant is a HUGE loss; it was one of the few places we all could afford to eat, and eat well in. Run by kind and real people, serving healthy east European home-cooking; it was the kind of place where you could talk to the person next to you and make a new friend. We used to have many such places, and they were important in the life of the community here. There are very few left now. The E. Village is replete with empty commercial spaces now. We have lost much of our local color and its saddening.

So that's the reason for that hideous vomit-like Charlie Brown blanketing the side of that tenement building. Jerkface is an unoriginal sellout hack. And it's not the only one. There is a lot of fugly murals all over the boroughs. It's like a bunch of lame imitation of Banksy.

The nexus of art and ballooning real estate speculation in total display. This has been going on too long that it is now part of the ether.

Very bad landlords (they should not even have that title, uber-capitalist speculators would be better) and a determined partner in Tod and Terrance's high school pal, pr specialist Chris Coffey, former Bloomberg shill.

Bad art, no taste, as constantly proved by their remodels which wipe out great old school architecture in the lobbies and common areas and make them look like cheap condos in Peoria. Charlie Brown mural would of been laughed out of the EV just a few brief years ago.