Meanwhile, Steiner East Village tells Avenue A to get in its belly

With a discussion of the new developments two blocks away at 500 and 524 E. 14th St. ... might as well look at the progress of developer Douglas Steiner's rather gargantuan condoplex at 438 E. 12th Street and along Avenue A to 11th Street... aka Steiner East Village... 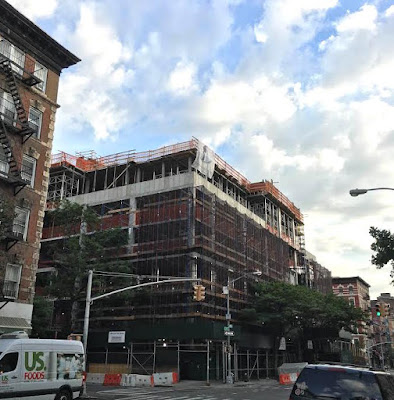 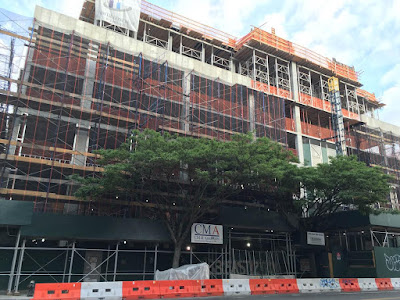 ... looks as if Stei Town might just swallow the corner buildings on 12th ... 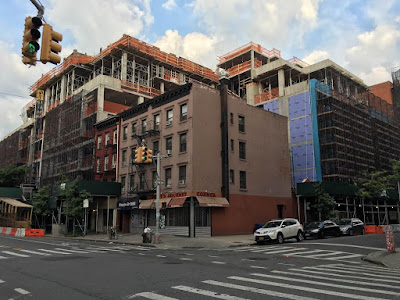 To recap, the 7-story, 82-unit building features Steindos starting at $1.1 million... with the 4-bedroom Steinhouse with 1,364 square feet of terraces that's asking $11.25 million.

Previously
Posted by Grieve at 4:29 AM

I wish all new construction went this smoothly, so many sites around me have taken 2 - 3 years for much smaller building. I look forward to the day when I will not be awaken each day at 6:45 by construction noise.

Sad part of this new construction is that it cuts the sun light on 11th, 12th streets and on Ave A.

I can't wait to see how the rich folks who are going to be these apartments are going to deal with the shit-show that this strip of Avenue A becomes at night with all the bar action.

"I can't wait to see how the rich folks who are going to be these apartments are going to deal with the shit-show that this strip of Avenue A becomes at night with all the bar action."

Some of them will be taking part of the shit show, the others will flip their condos for a huge profit and move to the UES.

12 mill for the penthouse... what a bargain! Planet Mirth Rocks!

And what has the Archdiocese done with their tax-free 41M? Nothing I bet.

"And what has the Archdiocese done with their tax-free 41M?"
Use it to pay off lawsuits, of course.