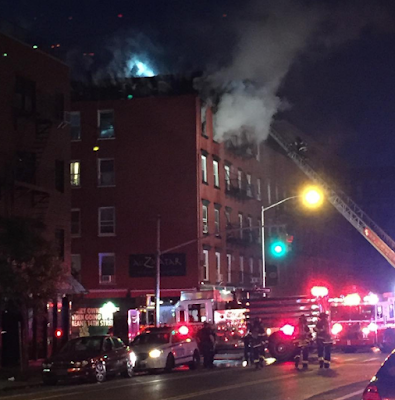 Firefighters responded to an early-morning fire on Avenue A and East 12th Street (500 E. 12th St. via @FDNYAlerts) ... the FDNY declared the top-floor fire under control after 20 minutes...

As this time we haven't heard any more details, such as injuries ...or cause of the fire.

The top-floor apartments appears to have been destroyed... 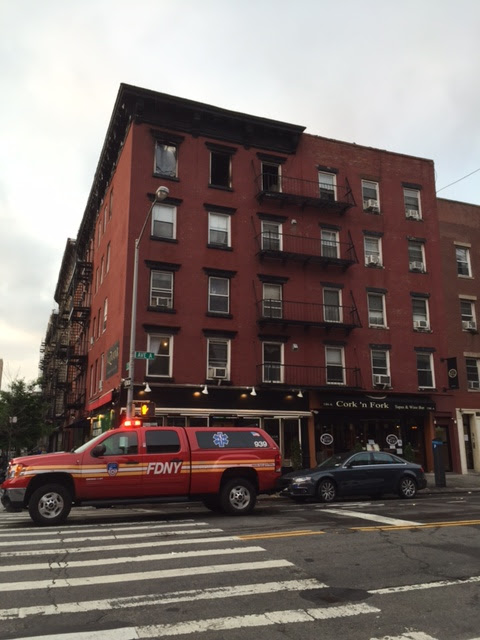 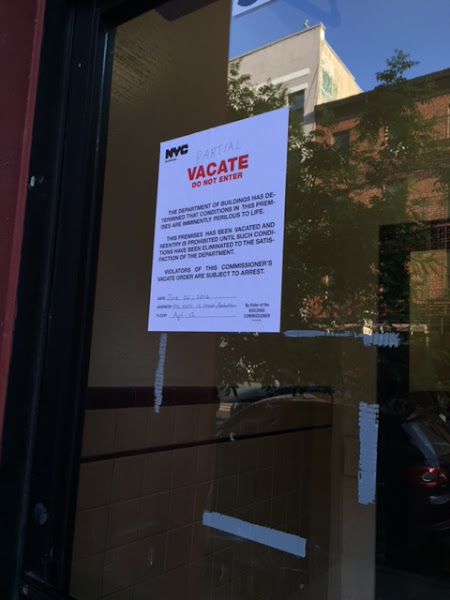 There is a partial vacate order now on the front door...according to DOB records, the partial vacate is just for unit 12, where the fire started (readers and sources at the scene say that a cigarette that wasn't entirely extinguished started the blaze).

The DOB also says that other minor damages from smoke and water were observed in units 3,6,7,8 and 9.

Oh my god. I hope everyone is OK. About to go outside right by that corner now, will see what's going on ...

Ran into the FDNY just now, who were procuring makings for lunch at Russo's. They said it was a mattress fire, and the tenant escaped (as I hope everyone else in the building did too - they didn't mention anyone else). I asked if it was a cigarette or candle, and they said there was an ashtray by the bed, so they assumed it was a cigarette. So glad to hear that no one was hurt, and they were able to get it under control so quickly.

Wed. afternoon four fire trucks were called to 182 Ave. B. The woman speaking with the firemen said that she smelled gas. She also said that the fire department was recently called to another building where someone had fallen asleep and had kept a pot boiling.

I wish there was a ban on smoking in these old buildings that don't have sprinklers. Their apartment was destroyed and the ones below suffered water damage. It could have easily been worse.

My building. My neighbor's apartment. I wasn't home and I'm on my way there now to see what needs to be done. Apparently the fire was confined to the bedroom. But of course there's collateral damage all over the building. My 1930's skylight, smashed, my brand new window broken. I had to cancel the trip I was on, and I'm on a bus now. What a nightmare.

A reminder we should all get a smoke alarm and/or a small fire extinguisher.

Sorry, Trixie. Your neighbors feel your pain. If there is anything any of us in the neighborhood can do to help, please post. It's sad how one bad apple can affect the rest of the building.

Trixie, I'm so sorry. This could have been any of us ... let us know if there is something we can do to help. I am glad you are safe.

Trixie, I don't know you but I wish you and all those affected the best. This is an awful situation, and we all know it could happen to any of us.

I know another man from that building, I think he is a lawyer? Anyway, hes a long time East Villager and involved in the community . I knew him from Poppy's, where we would talk about neighborhood issues often. I hope it was not his apartment! (then again he was not a smoker)
Trixie, if you need any help, stop by El Sol Brillante. I'll be around Sunday (after 11 am), ask for Sarah.

Thank you so much, your kindness is so touching, and comforting. I'm home now and the only damage to my apartment is from the firemen tossing everything about. Broken glass everywhere, but no water damage, and barely any smell of smoke. I think the apartment where the fire was is pretty much trashed, and the apartment below that is a stinking mess too. But like I've heard people say, I consider myself lucky. I might have lost everything. And thanks again neighbors for reaching out to me, it means more than I can say.