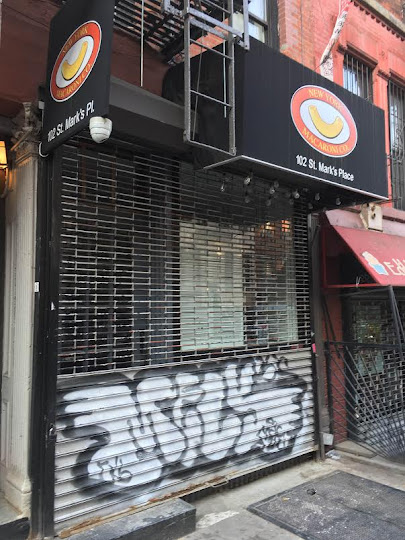 Over at 102 St. Mark's Place, crews have been renovating the former New York Macaroni Co. space, where the former sign remains.

Word here via EVG correspondent Steven is that a vegan doughnut shop is in the works for the address between Avenue A and First Avenue. The shop will just sell the doughnuts, which won't be baked here on the premises. Those are the only details we have at the moment.

New York Macaroni Co.'s 6-month run ended at the end of 2015. Before this, Puddin' never reopened after the city found them operating with an expired food service establishment permit in November 2014.
Posted by Grieve at 4:14 AM

We really need this, because the vegan ice cream, macarons, chocolates, and cupcakes really aren't cutting it. Who cares about boring ol' fruits and vegetables anyway? I'm so grateful that today's vegans can be as fat and diabetic as everyone else. God bless America!!

Is there a vegan bar somewhere in the neighborhood? Maybe a vegan, gluten-free, organic, farm-to-table nail salon?

A glutton free mac & cheese shop is replaced with a vegan donut shop, we are living in Portlandia.

Just because you like to eat beast doesn't mean that others do. So judgmental. Go vegan!

I bet the donuts are relabeled Dunkin or or KCreme!

East Village without vegans stores is like a fish without a Citibike.

I wonder if it's Dun-Well Doughnuts, the shop in Brooklyn... Great doughnuts there that are more like coincidentally vegan (as in, you wouldn't necessarily know unless you were told). It's more like an added-bonus that they're vegan.

9:53, I'm the first commenter, and I've been veg/an a long-ass time. I guess you could see all this twee "food" as a victory for veganism, but let's be serious. This isn't about animals (or health, or the environment); this is for special snowflakes with trendy diets and way too much money to burn.

Vegan baked goods generally have 1/3 fewer calories and taste great. Sweet without the guilt. But if the prices are high...they will go the way of every greedy shop owner in the EV.

Back in the day, vegetarian was good enough. And healthier and cheaper. What makes a vegan donut shop so politically -- and environmentally -- correct anyway, 9:53?

We spend far too much time *processing* vegan stuff; all we need to do is just not eat the beast, right?

Contemporary vegans are usually flexitarians, which is annoying. I had dinner with one, and because he was out at a restaurant and was offered chicken, he had no problem. As an ethical vegetarian, I was stumped by his quick instincts at social survival.

Coming soon to this location in six months: Macaroni Madness! Make a complete outfit using nothing but elbow macaroni and twine. Then, watch as expert tossers cook and serve your edible creation!

Applying liquor license application soon and CB3 will unanimously approve it because owners will argue that they just can't make rent and those vegan doughnut must be paired with a Manhattan and/or Duck Fart.

Sounds bland. No thanks, but I ll stick to regular donuts made of lard, butter, eggs and sugar...

The city should give landlord's in the East Village special permits and zoning variances if they agree to rent to affordable restaurants. My wallet was emptied at Angelika's last night, and that's for vegetables!

What's so unethical about butter? Also vegetables are organisms too.