Documenting 166 Avenue A through the years 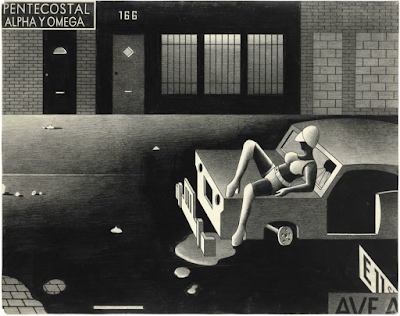 I always enjoy receiving correspondence from Anton van Dalen, the artist who has lived on Avenue A between 10th Street and 11th Street for decades. Here's the latest dispatch:
Sending you photos of our home at 166 Avenue A, of its over the years evolving facade appearance. The photos cover a span of now almost 50 years of my observing and documenting our neighborhood.
Came to this address in 1971. Before we lived at 123 Rivington St. near the corner of Essex Street.
Initially I just watched and listened to the street life, its sidewalk theater with joyous salsa music. It was not the New World that I had imagined as child growing up in Holland — no streets here paved with gold. Rather streets paved by the colors of many cultures.
On first arrival our new home looked abandoned, hardened by history, burned out house next door. And by contrast, a storefront church on the other side, often crowded with multigenerational Puerto Rican families.
Today our Puerto Rican community is marginal, as neighborhood's demographics radically changed. As my below succession of photos illustrate, the creeping ongoing gentrification of our neighborhood.
I consider myself a documentarian of the East Village, yet I am a participant and spectator to its evolution. Began documenting my street surroundings in 1975, urged on by wanting to note and remember these lives. Came to realize I had to embrace wholeheartedly, with pencil in hand, my streets with its raw emotions.
Also the everywhere discarded bloody heroin needles on sidewalks stunned and urged on my thinking. The drug dealers, the junkies, the police, the firefighters, were then the unquestioned royalty of our neighborhood.
Then came hopeful efforts by gardeners in garbage-strewn abandoned lots, squatters, community organizers. They were able to redirect our devastated neighborhood toward again being a community for many.
So my documenting became more and more informed by the stories of my neighbors' acts of activism. And a commitment on my part to be true to those lives, of their raw heartfelt emotions, birthed on the street.
Their truth telling kept my work honest, brought authenticity to my documentation, so critically important. That my work needed to join the raw birth, speak for, this sad beauty born on our streets, and not to forget. 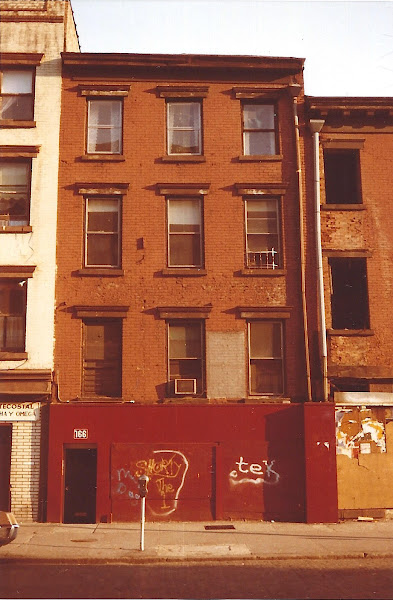 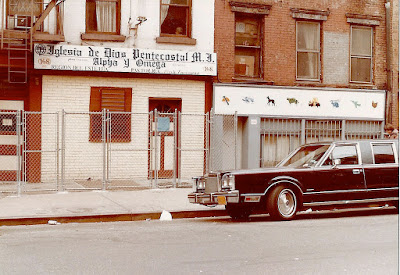 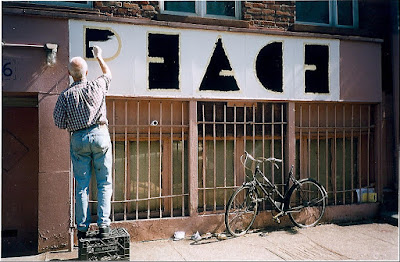 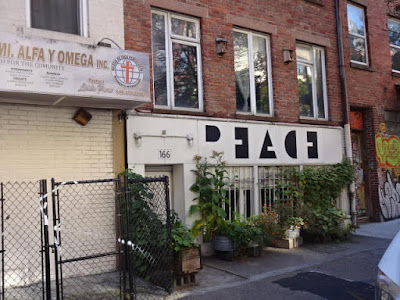 Postscript:
One of Anton's drawings, titled "Street Woman on Car" (1977) and posted at the top, has been acquired by the Whitney. That drawing is included in a show there now titled "Around Day's End: Downtown New York, 1970-1986." This exhibit closes on Nov. 1.
Anton is pictured below with the exhibit's curators, Laura Phipps (left) and Christie Mitchell (photo by Grace Keir). 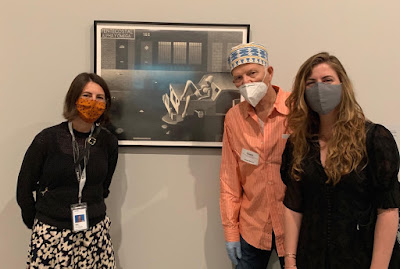 wow what a talent! i love this work, will have to check out more! wonderful article too, thank you grieve!

Wow this is awesome. Thanks, Grieve.

I love the Peace building...I hope its there forever!

I would love to see all of his photos!

So cool to see the evolution of van Dalen's space. Thanks for sharing his story!

Anton has been an amazing presence and gift to the art world and our neighborhood. His appreciation for the culture and people of the streets is so palpable. So cool the melding of East Village into his work and vice versa.

Wonderful, thank you for sharing!

I saw the top photo and knew right away it was an Anton Van Dalen piece. His originality and talent is immediately recognizable. As a body of work, his is invaluable as a historical document.

Best wishes to Anton, his family, and his pigeons!

The corrupt cops and drug dealers of the 1970's were hardly the *royalty* of the neighborhood at that time. They were not respected but feared. Fear, to this day, has always been part of policing.For those who disprove of gentrification the alternative is crime, drugs, and needles in the street. Having lived through that in the late 70's/ 80's there was most definitely an attraction to the decadence and lowlife of downtown NYC but I'll take the more sanitized version today over the hot mess it was then.

Excellent images; thank you for sharing.

I love seeing photos of the buildings from decades past.

When did the peace sign appear? John Lennon would approve....

I met Anton in the early spring of 1979 while visiting NYC for the first time as a Dutch artist living in Amsterdam.
The click was there from the first day. I stayed in the city for more than three months visiting Anton many times.
His area then looked like it just (hardly) survived a war, Anton never let me walk back to my hotel in the village alone and often walked me back untill the doorstep. He showed me his area, introduced me to people sitting in front of their houses and made me feel comfortable and at ease.
We spent many hours talking about both our work in his studio under the pigeon coop.
In his 'social' artwork he showed to be developed into an American version of the Dutch painter Jan Steen.
Friends for nearly 42 years now. May it never end.

so good to see this, also the quirky as they come drawings of a previous post. anton is a long time friend whose wonderful work we admire and follow from his old homeground.

Anton van Dalen is nothing short of a national treasure.