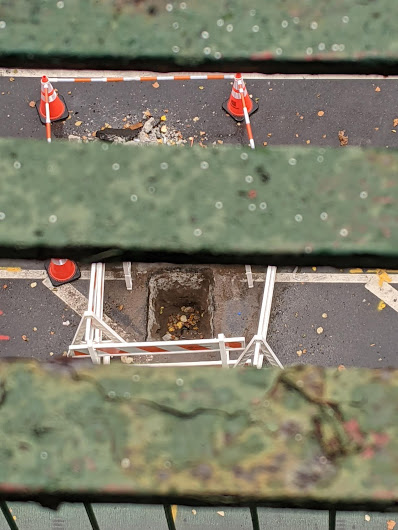 An EVG reader shared details about a gas leak reported on Thursday afternoon at 91 First Ave. between Fifth Street and Sixth Street.

Workers came, dug a hole, turned off the gas set up a half-assed looking barricade and left.

ConEd on the phone said this is an "emergency situation" and therefore there were no notifications, no instructions. no information for residents. Also said a replacement valve was "on order" and the job was in progress.Residents (several elderly) and businesses are currently without hot water or gas for cooking. 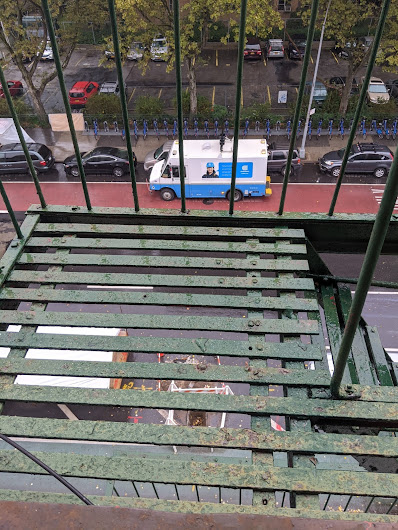 And a weekend update:

There was a "pressure change" detected on the main line feeding into the building from the street. A gas smell was reported by someone either on the street or a resident.
Several years ago (3-4?) there was an un-regulated repair on the water/sewer lines leading into 93 First Avenue that exposed more than 4 feet of gas line for 91 First Ave., which then had to be emergency-repaired by ConEd/the City.
They replaced an entire block of gas line up from Fourth Street to Sixth Street at that time but left the OVER-100 year-old connector valves that actually feed into these 114-year old buildings.So...Thursday afternoon there was a leak on our valve reported (No. 91) and ConEd came, dug a hole and said, "We're just here to dig the hole and turn it off."
Apparently, once the gas is shut off, it is no longer considered an "emergency" and since the valve "needed to be ordered" AND it happened on a Thursday work will not commence until Monday at the soonest IF they get the part delivered on time.
That means everyone in this building, during a pandemic, is currently without heat and hot water for bathing or working stoves for cooking for what will be at least four-five days.
With no notice, no support and no information from any agency involved. Residents had to call up multiple city offices to find out what was even happening.

Figure realistically three to four months. Con Ed will have to inspect the work and sign off, a lengthy process indeed.

I know people that have been without gas for a year and a half. Good luck.

I am so sorry for what these people are going through.

The sheer perversity of Con Ed & the fact that it seems they are answerable to NO ONE, these things are part of what makes this city an insane place to live. No accountability, no help, no clear chain of responsibility - this is not right.

Start pushing your landlord NOW for electric hotplates and the like. You're in for a horrible long period of waiting.

Con Ed doesn’t care if you have hot water and heat. Con Ed only cares about you paying your overly inflated utility bill.

Con Ed really needs to be scrutinized more by public officials. They have no accountability, and it shows. In front of my building was huge stream leak which took 11 months to fix. The actual work seemed to be about 1 week. Many days of digging up the same hole, only to cover it up again, for months at a time. We also had no gas on a different occasion for > 6 months. This sort of behavior should not be acceptable.

The gas in my East Village building was turned off a few weeks ago after a gas leak was discovered. The landlord gave us toaster ovens and electric burners to cook with until it is fixed. But it's going to be a lot of work. Are we entitled to a rent reduction during this period? Or can we get out of our lease? I have done some research and am not finding much good news. But if anyone has any personal experience they can share, the info would be appreciated.

My building didn't have gas for almost a year and we received a rent reduction, although we worked hard to get it. We formed a tenants association and pressured our landlord almost everyday to give us a rent reduction. Luckily he obliged.

(Not legal advice) If the apartment is rent-stabilized or rent-controlled, you can usually apply for a rent reduction with a major loss of services like that. If it's market-rate, it's more a question of what you can manage to extract from the landlord, unfortunately.

Hard to believe that Con Ed doesn't have spare parts in stock. Incredible that it takes so long to order a new one.This would never fly in the private sector. I had broken gas valve problem with my boiler last week. Technician came late afternoon on Wed, said part may possibly take 2 or 3 days to order. He was able to source the part very next morning. Job was finished by 11:30 am Thurs.

This is not entirely correct, as of right now, because they're not allowed to disconnect for not paying, until pandemic emergency orders will end. Haven't paid them a penny in over 7 months. When that day would arrive, it will be a long term payment arrangement, with no down-payment upfront.

No rent reduction. Where do you think you live, Norway?

This is the same giant corporation that not long ago received the okay for a massive rate increase on gas and electric from the Public Service Commission. We are now paying (or not, as the case may be) 4.2% more in 2020 for electricity, next year another 4.7% starting in January 2021 and another 4% in January 2022, for a total of 12.9% more. Gas went up 7.5% this year, then there will be an 8.8% increase in 2021 and another 7.2% in 2022, or an additional 23.5% - and the 2020 cash grab was cut more than 75% by the PSC from Con Ed's initial request. And with all that extra money, they can't keep basic parts and supplies in stock and get their overpaid work force out to help their customers in a timely manner. Amazing, and not in a good way.