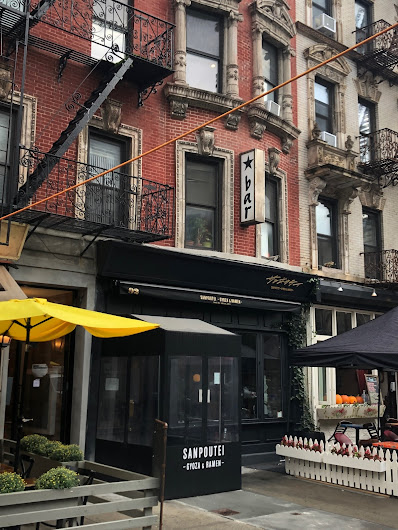 Sanpoutei Gyoza & Ramen apparently won't be reopening at 92 Second Ave. between Fifth Street and Sixth Street.
The restaurant, which just debuted on Jan. 23, has been closed since the PAUSE went into effect in mid-March.
And now, a retail listing for the space has arrived on the market. (H/T Steven!) There's no word on the rent for what the broker describes as a "brand-new, multimillion-dollar, fully-constructed restaurant space."
A lot of time, money and effort went into the restaurant that was only able to be in service for less than three months. As we've pointed out, this launch was a long time in the making. In the fall of 2018, CB3 OK'd a beer-wine license  for the Sanpou Group, which operates 30 restaurants worldwide, including Sanpoutei Ramen, which started in Niigata, Japan, in 1967.
Kabin Bar & Lounge closed in March 2015 at this address. While there were a few potential suitors, the storefront remained empty until the build-out for Sanpoutei Gyoza & Ramen began in early 2019.Previously on EV Grieve:• The first sign of Japanese ramen shop Sanpoutei arrives at former Kabin space on 2nd Avenue
Posted by Grieve at 5:00 AM

What a shame. I was actually waiting for them to open, then they had to shut down before I could try the place.

This has to be absolutely heartbreaking for the owners whose dreams were crushed.

It's a Japanese chain, so most like would take the loss uncrushed.

Really a shame. It was a fantastic restaurant. The food was wonderful and the vibe was great, at least on the off-nights when the trendy crowd wasn't overwhelming.