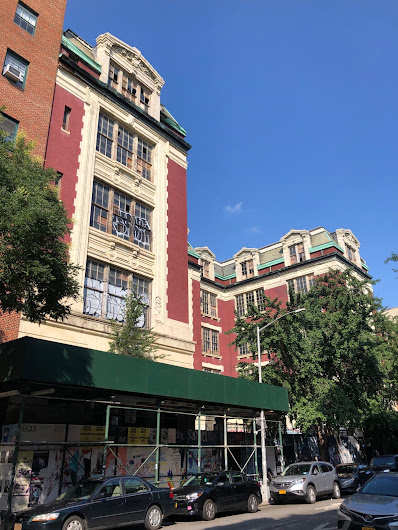 The Daily News reports that residents and local preservationists have concerns that the long-vacant P.S. 64 building — described as "crumbling" — on Ninth Street between Avenue B and Avenue C poses a threat to the community.
Per the News:

Village Preservation executive director Andrew Berman said the building’s sorry state resembles that of 729 Seventh Ave. in Midtown — now the center of a contentious lawsuit over the death of a woman struck by debris that fell some 15 stories from a crumbling façade.
“We don’t want another situation like [that], where a combination of owner and city neglect leaves a dangerous situation unaddressed and an innocent bystander suffers the consequences. Conditions at this building are ripe for just such a tragedy,” Berman said.
Carolyn Ratcliffe, the president of the 9 BC Tompkins Square Block Association, lives next door to the building. Dreading the possibility of an accident, she makes a point to always walk on the other side of the street when nearby.

And the response from landlord Gregg Singer?

His lawyer Nicole Epstein said comparing Singer’s sorry building to the Midtown tragedy was unfair, given that he’s built a sidewalk shed at the property. Neighbors complaining about its condition had also opposed Singer’s proposals to develop the property into college dorms, she noted.
“It’s quite ironic and hypocritical,” Epstein said.

On Feb. 6, 2019, the city evacuated adjacent buildings after discovering cracks at the onetime CHARAS/El Bohio community center ... and later issued a Full Vacate Order.City inspectors eventually determined that the building was safe, but did issue a violation to Singer for failure to maintain the exterior facade, per Curbed. Singer told Curbed at the time: "It’s all political. This is part of a concerted effort to put pressure on us. I was just at the building. There's definitely cracks — that we were already aware of — that will be pointed and repaired, but there’s no immediate danger."Singer, who bought the property from the city during an auction in 1998, has wanted to turn the building into a dorm called University Square. The DOB continues to maintain a Stop Work Order — dating to August 2015 — on the building.
Posted by Grieve at 4:59 AM

there has to be/should be---a MINIMUM standard for ALL buildings in NYC (appearance/structure/safety)---building a sidewalk bridge to protect the community from this BLIGHT is not enough......

I’ve avoided that side of 9th street for years, I fear an impending tragedy

And yet another instance where our do-nothing mayor, who publicly promised at the Town Hall he held on
Houston and D back in October 2017 that the city would start moving to buy PS 64 and return in to the neighborhood for redevelopment as a true community resource, has done jack (insert poop emoji here). Could he BE any more of a loser?!?

Gregg is beng foreclosed on there for an ill advised $50 million loan. Instead of fixing it he is paying Trump's old lawyer's that Epstein works for- $20,000 a month? to file case after case and get quoted in articles like this one. Fearing another Beth Hamedrash Hagodol tragedy here on LES where are all the officials to prevent this slow motion danger?

nobody wants your dorm dude, just get the fuck out

I just received an email from GVHSP about this. There is an update.

From the email:
"The Fire Department and Department of Buildings inspected the property and the city issued what is called an “Immediate Emergency Declaration” and requested that the Housing and Preservation Department seal the building.

The current owner was notified, and asked that the emergency declaration and sealing not be acted on by the city, and that they be allowed to do the work themselves. The city acquiesced to this request and did not take action to seal and secure the building, but is instead letting the owner hire his own team to do the work.

We were informed of this decision after the fact and certainly would have advised the city to move ahead and not allow the owner the opportunity to potentially further delay. We have communicated our concerns to City given the owner’s consistent track record in this regard and now will closely monitor to ensure the work is done as soon as possible and without further delay."

Unbelievable. Where is DeBlasio?

Why don't Cynthia Nixon and David Schwimmer buy PS64 and renovate it? Give back/ Do something nice for the community. I always liked the idea of art studios, or band rehearsal space.