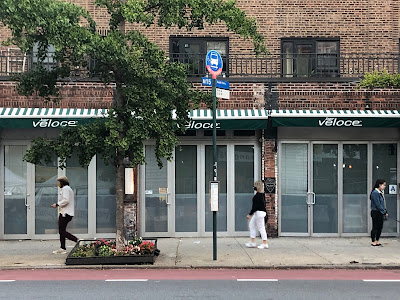 Seven months have passed since Gov. Cuomo's PAUSE order went into effect on March 22.
By late June, bars and restaurants were allowed to launch sidewalk and curbside dining. (And bars had to start serving a "substantive" meal.) By late September, these establishments could start serving indoors — at 25-percent capacity.
Many bars and restaurants have had to close permanently, with dwindling revenues, scant clarity and leadership from elected officials and city agencies and, in some cases, unforgiving landlords. We've documented many of these closings.
However, there are still many places that remain closed — perhaps continuing to wait it out ... or having closed without making the news public.
The following list features places that EVG readers have specifically asked about in recent weeks/months. It's not meant to be a comprehensive rundown of every bar-restaurant currently not open in the neighborhood.
This list also doesn't mean a closure is permanent. (The Library, for instance, continues to be active on Instagram, looking forward to days ahead.)
• A & C Kitchen, Avenue C
• Bar Veloce, Second Avenue (above)
• The Belfry, 14th Street
• Blue & Gold, Seventh Street
• Brindle Room, 10th Street
• Champion Coffee, 14th Street
• City of Saints Coffee, 10th Street
• Crocodile Lounge, 14th Street
• d.b.a., First Avenue
• Doc Holliday's, Avenue A
• Double Down Saloon, Avenue A
• Drexler's, Avenue A
• Drop Off Service, Avenue A
• Drunken Dumpling, First Avenue (Google says permanently closed)
• Finnerty's, Second Avenue
• The Library, Avenue A
• Little Poland, Second Avenue
• Madame Vo BBQ, Second Avenue (Madame Vo is open on 10th Street)
• Milano's, East Houston
• Nostro, Second Avenue
• Paper Daisy, St. Mark's Place
• Prune, First Street
• San Marzano, Seventh Street
• Thirsty Scholar, Second Avenue
• Tile Bar, First Avenue
• 310 Bowery, the Bowery
• Tom & Jerry's, Elizabeth Street
• Williamsburg Pizza, 14th Street (other locations are open)
Posted by Grieve at 5:10 AM

We have an incompetent mayor, and a governor who during the covid emergency has time to write a book. Unbelievable.

bring back the blue & gold and little poland, throw in milano's, and i will be grateful! wishing all of these establishments a speedy return!

What about Mamas Bar? Shocked they aren't open with all that space

I hope people are keeping journals. There is so much that seems to be forgotten or lost in the morass of chaotic drama these last few months: the initial fear and confusion, the shock of bars shutting down all at once, sudden mass unemployment, deaths of many in our community, lines at the grocery store, refrigerated trucks outside hospitals and funeral homes, the night curfew, TP and medicine hoarding, threat of closing parks, free buses, a field hospital in Central Park, 7pm cheer for essential workers...there were/are so many unprecedented experiences we all shared that must not be forgotten.

We have a once in a lifetime pandemic, that's what we have. Nothing to do with either. Try living under DeSantis instead.

Some hopeful news - yesterday, Little Poland's Instagram account announced that they would probably re-open in November once 50% indoor dining is instituted.Cross your fingers!

My partner ran into a woman sweeping outside of tile bar last week, she said they were planning on reopening very soon 🤞

Don’t forget summer of protests and the reinstated curfews, burned out police cars, looted stores, 2020 has been one hell of a year we will never forget.

Pouring Ribbons, second floor with no outdoors. Hope they reopen :(