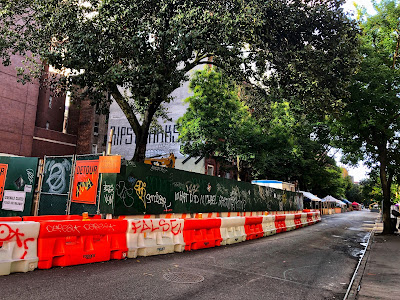 It appears that the 10-story office building going in at 3 St. Mark's Place at Third Avenue will be 20-percent smaller than the developers had hoped.
Yesterday, the City Council’s Zoning Subcommittee voted down the application by developer Real Estate Equities Corporation (REEC) seeking to transfer air rights from the landmarked 4 St. Marks Place to the new building across the street.
With the air-rights transfer, REEC would have been allowed to build 8,386 square feet larger than the current zoning allows on the northeast corner.
The Village Preservation, who had rallied support against the transfer, noted this denial via an enewsletter:

This more or less guarantees that the air rights transfer, which requires City Council approval, will not happen. Local Councilmember Carlina Rivera voted against the air rights transfer and urged her fellow Councilmembers to do the same. State Sen. Brad Hoylman and Assemblymember Deborah Glick had joined us in testifying against the application and urging its rejection, and Borough President Brewer had recommended its rejection earlier in the year.

As we've been reporting in recents months, work has already commenced on the northeast corner of Third Avenue and St. Mark's Place, where the building has a February 2022 completion date.
Regardless of an extra 8,000 square feet, construction will still happen. The project's architect, Morris Adjmi, has said a building of a similar height size would be built as of right.
REEC picked up the 99-year leasehold for the properties here for nearly $150 million in November 2017.
Previously on EV Grieve:• New building plans revealed for 3rd Avenue and St. Mark's Place

Hooray. They got it right this time!

They definitely got this one wrong

Carlina must be up for re-election soon. No other explanation.

A great win for the livability of the community. Sends a great message to developers that they can't change laws and rules to make a quick buck at the expense of neighborhoods. The laws are there for a reason, not for you to ignore. Thanks to everyone involved in this victory!

A small victory for the neighborhood. Let’s hope it sticks. The developer will be back in court with his high powered team of lawyers suing to have this decision overturned.

We'll support anyone who would go against her in the primaries.

Why would developer go thru the air transfer process right before election? Are they mad. It is obviously going to be denied. I love my neighborhood but taller building at that corner would be okay.

Good. That fucking massive black building fucked up so much of the feeling over there. Extraordinary.