90 E. 10th St. is for rent, bringing an official end to the stand-up steakhouse phase 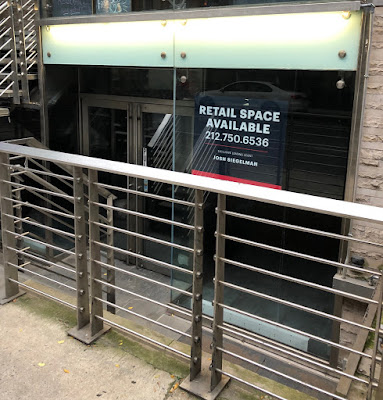 A for rent sign now hangs — as of this past week — in the front window at 90 E. 10th St. between Third Avenue and Fourth Avenue... this marks the official end of Ikinari Steak, which debuted here to great curiosity (and hype!) in February 2017.
As previously noted, this was the first U.S. location (there are more than 100 worldwide) for the popular Tokyo-based restaurant. The concept: Diners, particularly in-a-rush office workers, stand and basically eat quickly.
However, the craze didn't quite catch on here. By early 2019, the fast-expanding company — Pepper Food Service Co. — continued to struggle to find an audience and shut down seven of the 11 Ikinari Steak outlets in NYC and converted two of them to another type of restaurant.
The original 10th Street location remained open... until the PAUSE went into effect back in March. By the summer, financial difficulties — due mainly to rent payments — caused the chain to face closing all its NYC locations.
In 2018, the company became the first Japanese restaurant chain to go public on the Nasdaq stock market. It was delisted from Nasdaq last year.
Previously on EV Grieve:• 1st sign of Ikinari Steak, the quick-serve, no-seat steakhouse coming to 10th Street • On 10th Street, Prime & Beyond has closed; popular Japanese steakhouse coming
Posted by Grieve at 4:53 AM

I can't believe they even lasted that long. NOBODY wants to eat steak standing up; why pay $$$ to eat under circumstances that remind one of wolfing down a fast-food lunch?

Insulting and poor taste concept. And I thought I had a lot of tolerance/appreciation for Japanese eccentricity.