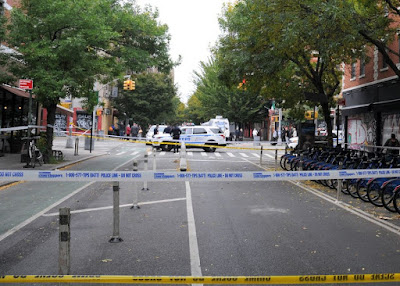 A 15-year-old boy was reportedly charged with murder in the late-night shooting death of Tyrell Williams on Avenue A on Oct. 11.
According to the Daily News, the teen, accompanied by his father [updated: story changed to sister], turned himself in at the 9th Precinct on Fifth Street.
Police say that the teen, who was with two friends, walked up to Williams and allegedly shot him four times in the chest on A between 12th Street and 13th Street. Williams, a 26-year-old father of two, died later at Mount Sinai Beth Israel.
Police have not released a motive in the shooting, though sources have said it was likely gang-related.
Photo from Oct. 11 by Michael Paul
Posted by Grieve at 5:20 AM

This is sad all around.

Violence is never the answer. 😪

A tragedy for all involved.

This city has a severe teen violence problem.

There's something very wrong with how children are being raised from birth if by the time you're a teenage you are okay with literally "ganging up" to commit murder.

Is there no one to set a good example for children these days? This seems like dereliction of parenting at a minimum.

The person that was shot was in a gang as well if you pass by the memorial on 4th St you will see...Also the deceased was being investigated for a shooting according to the news. To all the young people in these gangs they have 2 options for you a very small coffin or a very small jail cell, or option 3 for the lucky ones maybe a small wheelchair. Those are your options.

It's well-established that the brains of teenagers are not fully developed with respect to planning and impulse control. Some people grow up in environments where there's plenty of guidance and room made for mistakes; some people don't. It should not be possible for a fifteen-year-old, any fifteen-year-old, to get their hands on a gun.

The perpetual underclass could be an undoing of New York City along with its astronomical rent prices and the glut of empty office buildings during the pandemic. Some urbanists are optimistic though. It will reset and only those with means could afford to live in the city again and the underclass are moving out for good. Perhaps moving to a city like Newburgh, just 60 miles north of NYC, where a large underclass is found, staring at the Hudson River instead of the Manhattan skyline. The same social dynamics are also apparent in the countryside, where the wealthy live in their Victorian mansions and their pretty villages, while the underclass live in homes that are partially boarded up without any decent amenities.

Stfu! I know kids whose parents are great the kid just got caught up and vice versa. Stop being so quick to judge people's parental abilities by the actions of their children!