Report: Officer in violent arrest on Avenue D resigns ahead of departmental trial 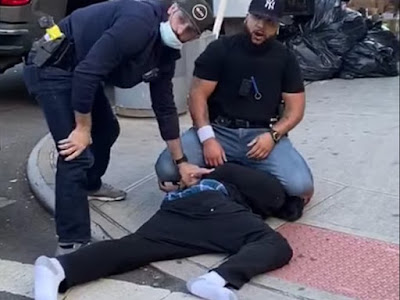 [Screengrab from video taken by Daquan Owens]
The NYPD officer who violently arrested a bystander on Avenue D this past May 2 has reportedly resigned instead of face a departmental trial.
According to the Daily News, the internal misconduct trial for Officer Francisco Garcia was to start today.
Garcia, who was stationed at PS4 on Avenue C, had been on desk assignment following the ugly confrontation when an attempt to enforce social distancing rules escalated on a spring Saturday afternoon.

Garcia and his partners originally approached a man and a woman outside the corner deli on Ninth Street and Avenue D over a lack of social distancing, police officials previously said. This encounter reportedly led to an arrest on marijuana and weapons charges.

As seen in a widely circulated video shot by a witness, Garcia, who was not in uniform, then walked toward several bystanders, including Donni Wright, a nearby resident who works for the NYCHA. Police officials originally defended Wright, who they said took a "fighting stance," which led Garcia to shout the n-word and brandish a taser before wrestling him to the ground and kneeling on his head. (See top image.) 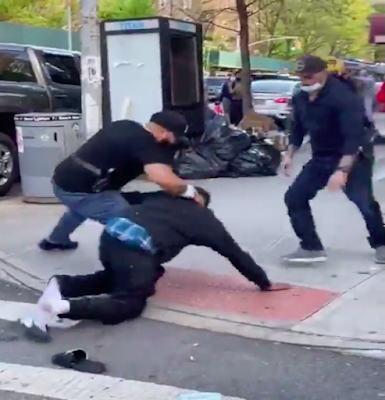 While Garcia had been investigated by Internal Affairs, with a recommendation that departmental charges be filed, police officials never provided any updates or offered clarity on why further actions were taking so long.

Local community leaders and elected officials gathered in late August to demand action against Garcia.
As for the news of the resignation, here's some coverage via Gothamist:

"The fact that this police officer resigned is important, but what's really important here is that he be criminally prosecuted, convicted and sent to jail for what he did," attorney Sanford Rubenstein, who's representing Wright in a civil lawsuit, told Gothamist.
The Manhattan District Attorney's Office has opened an investigation and interviewed Wright about the incident, but has not filed charges, nearly six months later. A spokesperson for the office declined to comment on the investigation.
In a statement, PBA President Pat Lynch said that Garcia was left "holding the bag" for the failures of City Hall and NYPD leadership.

The city had paid out nearly $200,000 to settle lawsuits involving Garcia, an eight-year veteran, as previously reported.
Previously on EV Grieve:
• In aftermath of Avenue D arrests, pols want answers from city on how social distancing is being enforced

"PBA President Pat Lynch said that Garcia was left "holding the bag" for the failures of City Hall and NYPD leadership."

The cry baby Pat Lynch who is a vehement Trump supporter wants to place the blame of his leadership onto the Mayor. No Mr Lynch the buck stops with you and your inablitly to discipline or better yet weed out maniacs like Garcia from your police force which has led to lawsuit after lawsuit from victims such as Mr Wright

Mr Lynch you are a failure and stain on reputation of the NYPD, btw I am a son of a retired Police officer.

Thanks for the update Grieve!

@noble neolani - 100% YES. Lynch is a pandering disgrace, the NYPD version of a mob boss, but the cops love him because he has their six no matter what they do, so he won't be going anywhere any time soon.

Good. Now this POS former cop can face a trial, and hopefully a conviction. The world needs less hatred, violence, and racism.

Lynch is a union head, he’s always going to side with his members, they pay the dues that cover his paycheck. About the only time he was silent was in the infamous East Village rape cops saga of several years back.

The DA should charge Garcia with a crime, a felony conviction would prevent him from being re-hired on most (sadly most, not all) other Police Departments.

In a just world, Mr. Wright could file a civil suit against now "Mr." Garcia for the lifetime value of his police pension.

Good. This happened the same weekend that cops were cheerfully distributing masks to the members of the public who were relaxing on the grass in Tompkins Square Park. There should be no place for hate on the public payroll.

Military Police are not taught to kill. What if I'm a Navy fireman and I come home but chose to be a cop, can I not get a job with the NYPD? Surely this is the most asinine comment ever approved for public view on this blog.

i stand corrected---obviously---i need to be VERY specific---so i will attempt to opine---slowly/deliberately---MILITARY PERSONNEL THAT HAVE BEEN TRAINED TO KILL---should not be COPS !!

@AFBP, how many military personnel do you actually know?

Note I am not referring to people with PTSD, or other issues that impact the ability to manage responsibilities...responsibly. Like being a punk asshole hiding behind a badge and using it to throw your weight around, like former NYPD officer Francisco Garcia.

"A harmless man is not a good man. A good man is a very dangerous man who has that under voluntary control."

We don't need a draconian police state. What we need is capital production in minority neighborhoods, not more police to stamp out crime usually coming out from poverty. It's start with NYCHA. Sell the damn apartments to it residents who are mostly people of color where they can generate wealth from their residences. If people are willing to see the status quo as being truly genuinely about a just society, then what we currently have is all smoke and mirrors, and not real equality.

That Garcia -- and officers like him -- can resign and still receive a pension is beyond absurd; it is egregious and should be illegal. After committing these horrendous and bias acts, the Union (supported by the Mayor) permit them to milk the system, living off our community and our taxes. Neither dems or republicans should endorse this absurdity. This absurdity remains possible only due to the cowardice and short-sightedness of political leaders as well as due to systemic racism. Worth noting (a fact) -- the NYC PBA has officially endorsed Trump. Hmmmm....