The Bean is returning to its former home on 2nd Avenue 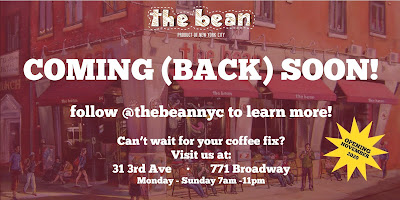 A familiar tenant is coming to the northeast corner of Second Avenue and Third Street: The Bean.
Owner Ike Escava shared the news... the coffee shop-cafe will reopen in the space some time in November.
"We belong there — it feels like going home," he said in an email.
As you may recall, The Bean closed two EV locations last November — this location and the one on First Avenue at Ninth Street. At the time, Escava blamed rising costs on the closures. The outposts on Third Avenue at Stuyvesant and Broadway at Ninth Street remain in operation.
The Bean outpost on Second Avenue and Third Street first debuted in December 2011. The retail space has been vacant since the Bean's departure.
Posted by Grieve at 5:30 AM

Hope they were able to get a steep discount on rent. Good to have them back

Good for the neighborhood.

Quickly, before someone "interferes with" the wonderful mosaics.

Now if they can only reopen the location on 9th and 1st.

Wow, so rare for a business to come back. Be nice to have them back.

Awesome! Congrats to Ike. Wish they could reopen their Williamsburg branch, too!