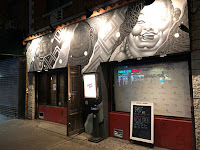 Back on Friday afternoon, Gov. Cuomo announced that 21 bars and restaurants in the state had their liquor licenses suspended for "egregious violations of coronavirus-related regulations."

Per the state's press release on the suspensions:

On October 9th, investigators with the state's multi-agency task force and officers with the NYPD observed over twenty patrons standing, congregating and drinking directly in front of the business without facial coverings well past the 11 p.m. NYC curfew for outside dining. Investigators noted the kitchen was closed and there was no evidence of food being served, in addition to numerous patrons entering and exiting the premises with open containers. NYPD officers dispersed the crowd and issued a summons for Executive Order violations.

Fat Buddha is currently open, though just not with any alcohol sales.

Other East Village bars-restaurants that ran afoul of the SLA back in the summer have all reopened, including the Wayland, Maiden Lane, Lucky, Hairy Lemon and St. Dymphna's.

I’m surprised it took this long. They’ve been getting away with it for months.

Agreed -- this was long overdue. I've walked by there on a weekend evening and not been able to get through the crowd because it was so massive. This was months ago, but still.

I'm not shedding any tears for a place that openly thumbed their noses at the COVID restrictions and showed no respect for their neighbors.

How are supposed to drink with a face mask?

Scientists and doctors—always busting up our lifestyle!

Well, if they bothered to follow the rules like everyone else, they would let you sit at your table - and sit only, not stand around - and have your mask off so you could drink AND eat. Problem here was, people were standing around, roaming from table to table, drinking with no masks and not a sign of the required food. Plenty of other places are adhering to the rules, this place thought they were above it all.

You socially distant in seats or get to go drink...

Agree with @1;52
Lots of businesses following the rules despite the economic loss. Not fair to them or to neighbors living around this. Im all for supporting restaurants and bar but places like this need more than a slap on the wrist. Not sad