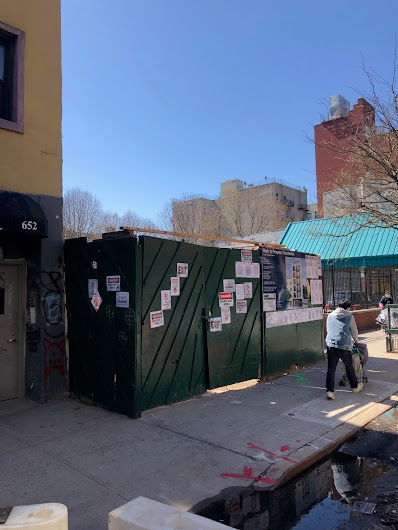 There doesn't seem to be much activity over at 650 E. Sixth St., where a new residential building is in the works (for some time).
The previous building on the lot, a four-story apartment building, was previously demolished here just west of Avenue C to make way for a 6-story structure that will apparently house five residences.
A rendering of the new condoplex is now on the plywood... 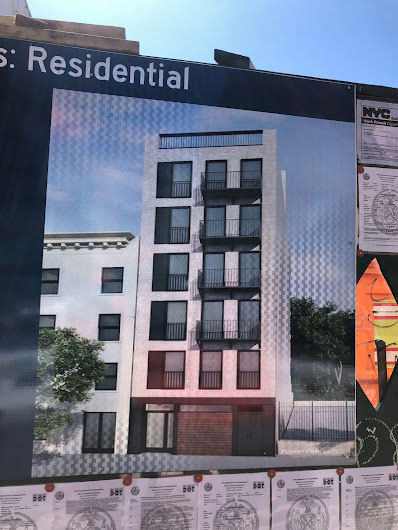 This comes more than five years after the building's new owners filed plans for the project. (The DOB OK'd the new building permit in December 2017.) The completion date on the rendering is fall 2022.
As New York Yimby noted in January 2016: "The 8,491-square-foot project will include 7,761 square feet of residential space, which means units will average 1,552 square feet apiece, indicative of condominiums."

Public records show that this building changed hands for $2.8 million in August 2013. The new owner is named East Village LLC in the filing.
This will be the second new building in the corridor ... joining the one just starting on the northeast corner of Sixth Street and Avenue C.
Previously on EV Grieve:
• Report: Plans in the works to convert 650 E. 6th St. to condos
Posted by Grieve at 5:20 AM

Looks exactly the same as 95% of all the other new "luxury" buildings going up in the EV today. Such great imaginations these architects have.

What a welcomed addition to our hood!
Gorgeous design! Wow! I am super excited to welcome our new neighbors!
I am sure that many a momentous memories will be created on those lovely balconies!
A Sunday morning, sipping tea with my hair in a pony tail as I cuddle on the balcony with a good book and take in the energy of the city. Of course I will have on an oversized "boyfriend" sweatshirt or similar. I imagine the sun will glint across my face and a passer by will surreptitiously take my photo then post to Insta where everyone will be like WOW, what a great picture! The photo will then be on the cover of Time magazine. And NO, I will not be interviewed by Oprah.

Ditto - the sass and sarcasm in this neighborhood is unbeatable