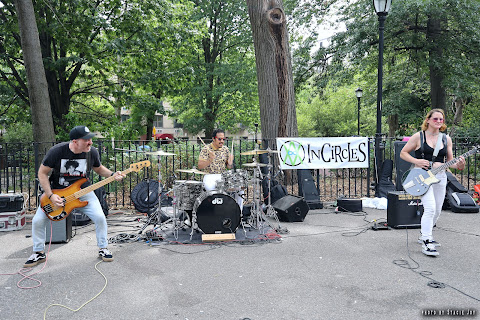 Photos and interview by Stacie Joy
We’re hearing from some neighborhood residents about how much they enjoy the free summer concerts in Tompkins Square Park and the joy they bring.
In an ongoing series looking at musicians busking, we focus on InCircles, who have been providing, along with a newly formed production company ShowBrain, summer weekend concerts locally. 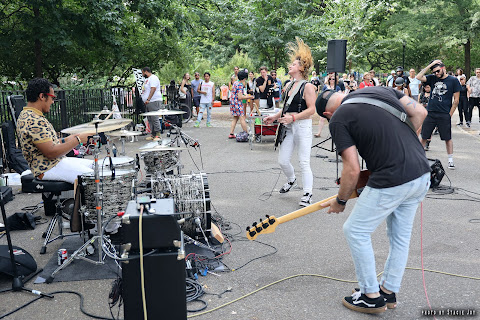 InCircles are Jewlee Trudden on vocals and guitar, Ozzie Silva on drums, and Matt Middleton on bass. After a recent show, I talked with the band about their history together and why playing Tompkins is so important to them.
What is the band’s origin story?
Jewlee: I started the band under various monikers in high school. After many band members coming and going over the years, Ozzie and I eventually came together and realized it was a partner-in-crime situation. Dream team and whatnot. We started playing together a year or so before Stable 8 EP came out in 2015.
However, the members of InCircles have all played music in multiple projects and met in the local music scene, eventually playing a show together in our respective bands.
Ozzie: Yeah, Jewlee and I played a show together while I was playing guitar in a small punk band called Stupid Naturals. We shared the same bill with InCircles, stayed connected, and a few months later, when they needed a drummer, I tried out and nailed the audition! We took a break for a part of 2019 and all of 2020, but we’re back at it now. Full force!
How would you describe your sound? And how did the InCircles name come to be?
Jewlee: Honestly, the band name came to be in a not-super-deep way. I think I saw it written on a window or something and was like, “eh, that’s kinda cool...” It’s not a Sunny Day Real Estate reference. A lot of people ask that. Sorry y’all.
However, it’s taken on a deeper meaning over time. Which honestly feels kind of cooler to me. It can be an in-flux kind of thing. Right now, to me, it means everything comes full circle. Maybe time isn’t linear. It’s easy to fall back into old habits; come back to relationships, romantic or otherwise, that maybe should’ve been left behind. Energy can’t be created or destroyed. Plenty of different applications; maybe the listener can decide for themselves what it means. I’d describe our sound as a fruity and bloody blend of high-energy rock-n-roll with some punk thrown in. 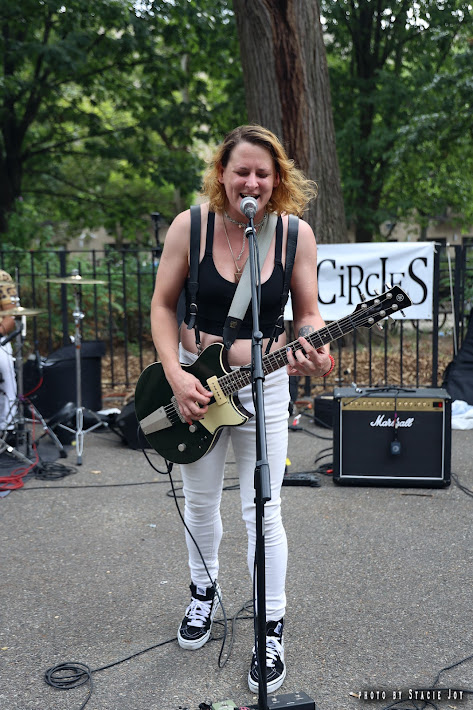 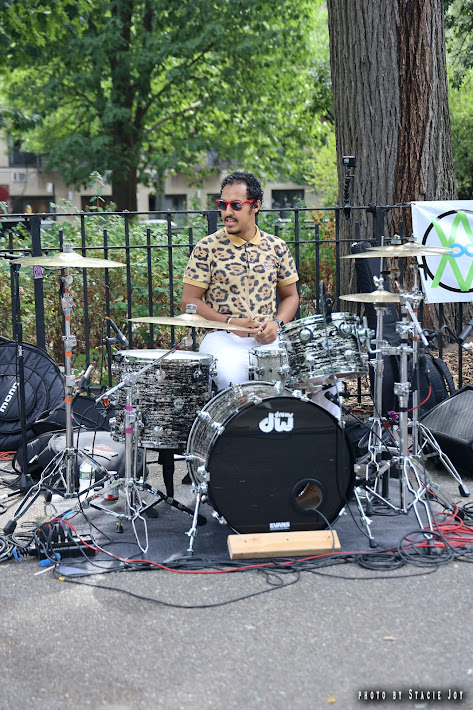 You play a lot in the East Village, yet band members don’t live in the neighborhood. What draws you to the area? Why is Tompkins Square Park especially meaningful as a place to play?
Ozzie: It’s New York City! We’re so lucky to live in a city with such a diverse group of people who appreciate the music and arts. It’s harder to convince people to come to a venue and much easier to bring the music to the people and create a following from there. Especially considering [the pandemic during] 2020 and 2021. A lot of people do not like to go to venues because of the fear of Covid, so it was much easier to play out in open spaces. Plus, it can be more fun than the traditional circuit! And Tompkins Square Park is a classic one. So many bands paved the way for us there.
I caught a set of yours at ABC No Rio maybe eight years ago or so, a very high-energy punk show. How has the band’s sound changed since then?
Ozzie: I’m not sure how much it’s changed yet to the public. We’re working on new songs so we’ll let the people decide from there.
What’s next for the band?
Ozzie: Recording and releasing some singles, touring in the fall and continuing to play and connect with other bands! 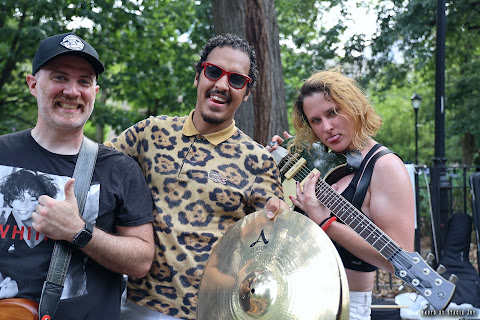 You can keep up with the band on Instagram.
And leaving you with the band's cover of "Blister in the Sun" ...
Posted by Grieve at 10:00 AM

I think I was at this set. They were great fun. Energetic, with just the right amount of acerbic humor in between songs. I encourage everyone to check them out as well as the other bands we are fortunate enough to enjoy in Tompkins. And tip them well!

Great band - hope to see them in the park and anywhere else again soon!

Great article about InCircles. Oscar has been in the neighborhood music scene for years . Glad to see he’s getting recognition for his music talent and for helping to keep the TSP music scene thriving.