At long last, workers remove the sidewalk bridge from around Mariana Bracetti Plaza 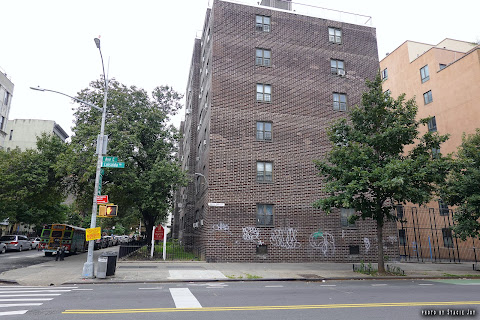 Photos and reporting by Stacie Joy
Last Tuesday, workers started removing the sidewalk bridge from around the Mariana Bracetti Plaza, the 7-story NYCHA-run housing complex on Third Street and Fourth Street along Avenue C.
The removal brought cheers from residents, as PIX11 noted. Residents who EVG contributor Stacie Joy talked with were thrilled it was gone, and that in the past eight years or so, the workers had only repaired a few bricks.
Tenant advocates have blamed the longstanding sidewalk structures for the increase in illegal activities here in recent years — not to mention more rats and unsanitary conditions from use as a public restroom. 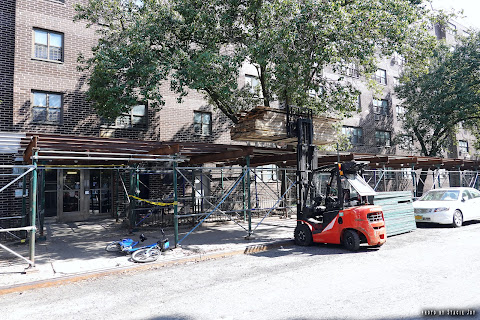 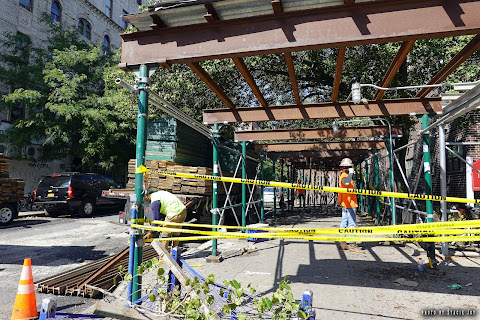 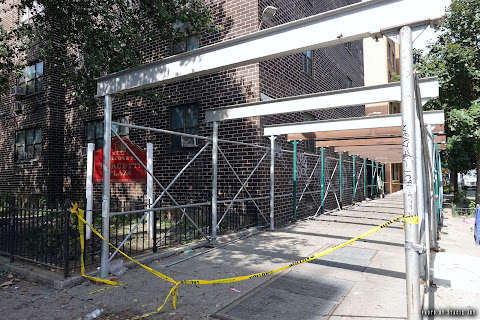 According to DOB records, permits for a sidewalk shed date here to December 2000. (Reason: "loose brick.") There are records of permits for installing a sidewalk bridge in March 2003 ... April 2004 (for "remedial repairs") ... August 2015 ... and October 2017. (A Google Streetview shows a structure in place continuously back to 2016.)
Hopefully, the sidewalks will remain free of other structures. There was a fake-out here in March 2021 after workers took down the sidewalk bridge before rebuilding it several days later. (They were replacing some rotting wooden planks.)
So the views for now... 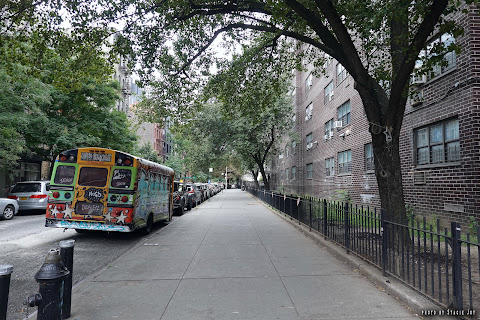 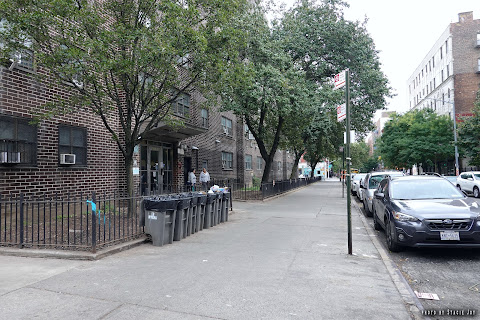 I read this capsule history of these - and many other - sheds and their drawn out "residence, and think, like many EVG readers here must think, that there's some extra money here.
From the city's decision of who will erect them and who maintains them and the trickle-in of money from each maintenance contract a company has . . . .
Anyway a little math will tell there's a lot of money in putting a lot of them up and in keeping them in place a long time.

Fantastic! Do Houston and B next!

The reason why these sidewalk bridges/scaffolds remain up so long, is because it is a cheaper alternative. If a building owner is required to repair a building, them must protect the pedestrians below. So these sidewalk bridges are set up, now since the pedestrians are now protected, they don’t have to repair the building and hence they just remain in place. Learned this on Cheddar a Youtube channel.

One episode of the excellent series "How-To with John Wilson" covers the scaffold industry, and it is indeed an industry. As stephen b mentions.

the bridge on 6th and B has been up forever. I'm guessing 12 years.

a small victory for all the neighbors that organized and pushed the City to get this sorted out. yay

It dawned on me in college that people are willing to cloak self interest in high-sounding moral principles (in this case, protecting innocent pedestrians from falling objects). And then I came to NY and found that this is, pretty much, the way the city is run.

I really don’t want to move to Florida or Texas. What ghastly places. Please, please give me reason to think I don’t have to.

The scaffolding on ave B , 6th to 8th street surrounding the school has created a haven for junkies..

So much scaffolding in general in the entire city .. such an eyesore and make areas more unsafe.

Very happy for the residents!!