The state of this Stuyvesant Street retail space 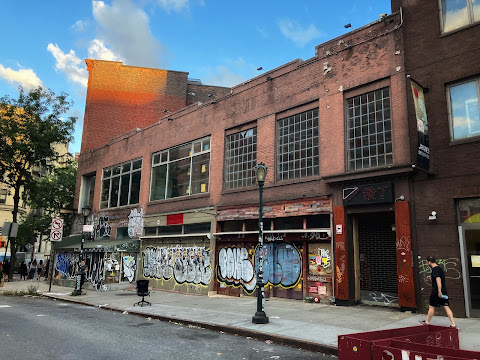 We've talked with several readers/residents dismayed by the current state of 8-14 Stuyvesant St. ... the once-vibrant corridor with four popular businesses here between Third Avenue and Ninth Street.
Today (photos from Tuesday), the storefronts sit empty and continue to attract graffiti and wheatpaste ads (and abandoned chairs!) ... 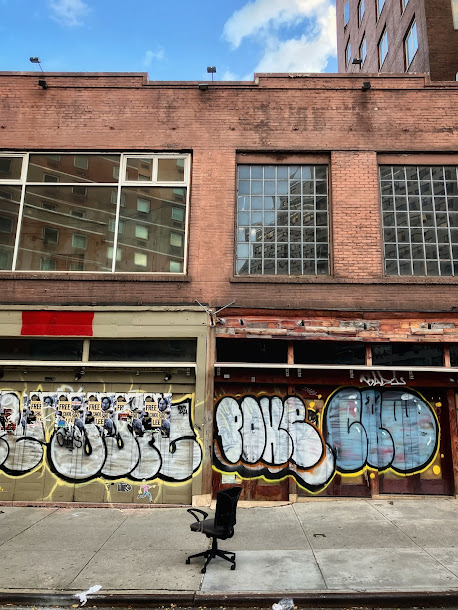 As previously reported, Village Yokocho, Angel's Share and Panya closed in these spaces in April. Another restaurant, Sharaku in the corner space at 14 Stuyvesant St., shuttered earlier in the pandemic. (Sunrise Mart in a separate building next door on the second floor also shut down.)
Cooper Union, which leases the buildings from their owners and had subleased them to the Yoshida Restaurant Group for more than 25 years, said it was the tenants' decision to move on. (This post has more background. Yoshida had not paid rent since 2020.)
No word on what the landlord, believed to be 29 Third Ave Corporation c/o Casabella Holdings, LLC, has in store for the spaces. We haven't spotted any retail listings for the address. (A Cooper Union rep told us previously that there isn't a new building planned on this site.)
So expect this strip to remain in this state for the foreseeable future.
Posted by Grieve at 4:59 AM

Sometime it takes longer to seal a deal with the right renter. Not a big deal, yet.

It is so infuriating that the city/police allow this to happen and landlords do not clean it up. Can we take some pride in where we live?

What with high crime rates in the city I think the police have more important things to do than monitor graffiti. And as a matter of fact the 9th precinct has/had a group of police volunteers when time allows clean up graffiti in the neighborhood.

Mid-stage capitalism is a blast. I'm so bummed I won't be around to see the last stage, I hear it gets even better!

I'd expect it to be Cooper Union's responsibility to clean up this graffiti if Cooper is, in fact, the lease-holder.

I'd also think they would clean it up out of sheer embarrassment, but I guess not!

WOW. I had to look at the picture 3x. I did not recognize it. So SAD they couldn't come up with a deal and everyone could stay.

I guess most renters don't want to get locked into an exorbitant 5 year commercial lease and given the shaky state of the economy makes sense.

Clean this up, Cooper Union!

What a stupid, pointless, senseless fate for what was a great block.

I'm like Anon 9:54, I didn't even know what I was looking at until I read the post. And this is from someone who had been patronizing Yokocho, Panya and Sunrise since the 90s. This is beyond heartbreaking.

And no, don't expect Cooper Union to clean it up, because despite their lofty rhetoric, unless there is a profit in it for them they don't care.

Looks like prime real estate for a high rise.

either more lux housing or a huge woo/bro bar coming sooner than we think :(
guess i'm one of those old geezer's who bemoan change cause i still miss Kamenstein's

Yes. Back in the 1980’s, Kamenstein Brothers hardware store was located at that corner. It was 2 stories.

Well, you have good company, b/c I still miss Kamenstein's as well! When they went is when I knew this area was going to get all yup-scaled. Now it's even worse, b/c we've been bro'd.

I wish Eddie Lang’s Guitar shop was still there

Lost all respect for this predatory landlord and how they let these legendary places rot. As a lifelong resident, so glad I didn’t go to cooper union, I would be ashamed to say so.
This is demonstrative of everything wrong with the city right now.

SHAME ON YOU COOPER UNION