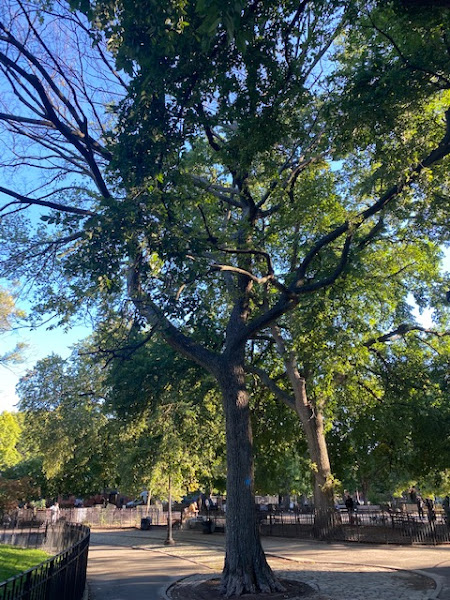 Photos by Steven
Parks workers were in Tompkins Square Park today to remove this American Elm between the main lawn and the dog run... unfortunately, workers said the tree had Dutch elm disease and needed to come down... 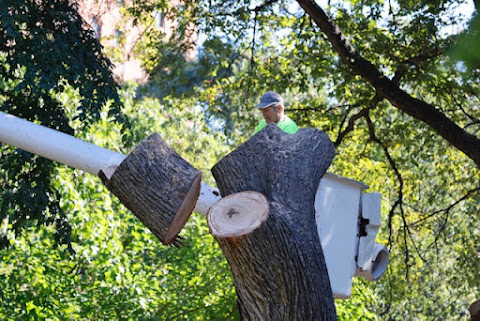 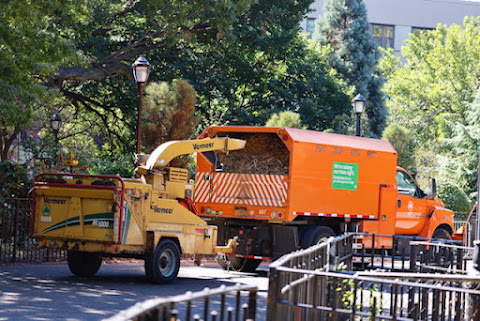 Dutch elm disease isn't a stranger to Tompkins Square Park, as we've seen through the years.
Some background on the diseaase:

Spread by bark beetles, the disease has decimated elm populations throughout much of Europe and North America.
The leaves on one or more branches of a stricken tree suddenly wilt, turn dull green to yellow or brown, curl, and may drop early. Young, rapidly growing elms may die in one to two months; older or less vigorous trees sometimes take two years or more to succumb. A brown to black discoloration occurs in the white sapwood of wilting branches just under the bark.

Parks Department is removing trees daily. No planting action to replace the removed trees. There are so many empty tree pits in the neighborhood. It was a real effort by CarlinaRivera to get many empty tree pits filled in 2019. Somehow there’s operating budget for the removal of trees but planting trees is a capital budget that needs advocacy and efforts.

I'm so heartbroken and furious with the city and parks department for their complete lack of maintenance of Tompkins. Tree care is an on-going effort and it seems they just want this park to self-destruct so they can pave it over and call it a day.

"Make sure you’re providing proper care and maintenance to your trees each season so that your elms remain healthy, and therefore less susceptible to disease."
"Having a tree service professional inject the tree with fungicide regularly (about every 3 years) can prevent the disease from occurring.
If you spot an infected tree and remove either infected limbs or the whole tree, it should be disposed of properly. This means burning the tree if you’re in a rural area or taking it to a designated disposal site otherwise. Call your local county extension office to find out what to do with diseased trees."
https://www.forestwildlife.org/how-to-treat-dutch-elm-disease/

Seems like we've lost quite a few trees in the last year. Hope the trend doesn't continue.