[Updated]: Unsafe levels of arsenic found in the drinking water at Riis Houses; when did city officials know? 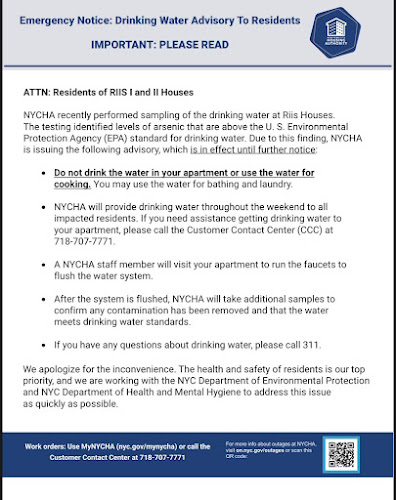 Updated below
The NYCHA has said it has found traces of arsenic in the tap water at the Jacob Riis Houses on Avenue D.
Signs in circulation around the complex between Sixth Street and 13th Street starting last night warned residents not to drink the water or use it for cooking indefinitely. According to the posted notices, the levels of arsenic are above levels considered safe by EPA standards.
In a bombshell report by The City, NYC officials were informed of tests showing traces of arsenic two weeks ago. However, officials didn't react until last night when the news outlet asked about the findings.
Mayor Adams showed up to distribute bottled water at the Riis Houses last night around 10 ...

An NYCHA spokesperson said the results from the tests only came back yesterday.

The report that NYCHA found arsenic in the drinking water at the Riis houses before notifying residents is deeply concerning.

⚠️ RIIS WATER UPDATE: We’re alarmed by yesterday’s news at Riis Houses. We’ve been on site ensuring families have updates + drinkable water. As we await more test results, DO NOT consume water from the building.

NYCHA + DOHMH must give answers on previous findings + remediation.

Levels of arsenic above 10 parts per billion can cause vomiting, nausea, diarrhea, paralysis, and blindness, and prolonged exposure can lead to several types of cancer, according to the EPA. The mayor's office declined to say how high arsenic levels detected were.

Over 2,600 people live at the Jacob Riis Houses.

I don’t know what to say. Other than my mom lives in this development and it’s a really scary situation. https://t.co/kidQg65YPs

Here's more from a new story at The City:

According to an internal NYCHA email obtained by THE CITY, DOHMH [Department of Health & Mental Hygiene] doesn’t believe the contaminant emanates from the water supply but is somehow coming from the plumbing system at Riis itself.
A key concern for DOHMH is whether construction from ongoing work related to damage inflicted 10 years ago by Superstorm Sandy, as well as current work on the development’s heating system, have stirred up the soil and contributed to the contamination of the water.

NYCHA's federally imposed watchdog monitor, Bart Schwartz, notified NYCHA officials to "ensure the integrity of any inquiry," and for the safety of residents "preserve all documents related to this issue"... including electronic and paper communications, test results and timelines.

Rivera's office was informed about nasty water in Riis before this report and did not even respond. What did Carlina know and when did she know it?

All of NYCHA is a deferred for decades maintenance mess. Seems like the billion for the DeBlasio mental health initiative and the billion (minimum) over the original East River Park plan could have at least paid for someone to respond to reports of bad water.

There's no reason not to release the test results immediately. Residents, and all New Yorkers, have a right to know what the numbers are and have been. The fact that the test results that are in the Mayor's possession have not been released is damning.

Was this because of the east river park demolition ?

“New Yorkers wanted to know if a long-term construction project is to blame and fear for any long-term health consequences.”
https://pix11.com/news/local-news/manhattan/manhattan-nycha-residents-raise-concerns-about-arsenic-in-water-supply/

Mayor dropped by last night around 10 pm to distribute water? I guess he had some free time before whatever late-night shindig he needed to be at...

"the recent shootings in the East Village"

1. Irving Place and 14th Street is not the East Village.

2. This is a SOP (drug gang related) at Ave D. Use the search engine feature at the EV Grieve blog and you will see.

And both seem to be planned murders, not random. Does not make it any better but facts are important in both of these shootings.

What about other buildings in that area ?
Certainly the water does not only go to those buildings
specifically, do they ?
How do the rest of the buildings in the area get tested ?

This arsenic finding seems very weird to me. The water is coming from the city’s upstate reservoirs and is the same as everyone else in Manhattan is drinking, which seems to be fine. (I’ve heard of arsenic in well water, which isn’t the case here.) And Riis is a big place — is all their water coming through a single pipe, so there could be a single source of contamination for everyone? And how would arsenic get in the water; it’s not like lead, for example, which can come through old pipes. So I will be interested if further testing confirms arsenic and where.

The city needs to be transparent. What about the rest of us living nearby? How is our water? They protected real estate interests after 9/11, telling us that the air was safe to breathe when it clearly was not; could this be a similar situation? Please, someone talk me down here. And why hasn't the mayor and EPA made a statement?

Unreal, but not surprising with this city - I feel for all those folks -

@CarlinaRivera. This is YOUR responsibility! The LES EV community has been calling for protections against ESCR demolition and contaminants such as arsenic for months. The @NYCDDC report from 2019 showed the potential danger.

WTF? How horrifying for the tenants. I cannot imagine. As if they don't have enough shit to deal with in these buildings already. There is something off about this. Why now? Has this been an issue for some time and no one came forward? Is this a targeted attack or just a fluke? Is this just coincidental in regards to the demolition of east river park as one other commenter suggested or a direct result of it? So many questions! The latter leads me to the water crisis in Jackson, Mississippi which is quite concerning and detrimental with an entire city having no access to water whatsoever, which I find utterly terrifying in the year 2022. Something such as this, which now hits close to home is indicative of how none of us are immune from a potential disaster. I live on 7th and C and wonder where our water supply is actually from. I certainly hope the city and officials can eradicate this problem otherwise many could become ill or die if this continues and others don't adhere to not drinking and cooking the water. And what is up with Mayor Adams? He should be issuing a televised address to the residents to provide further information and assurance to mitigate any anxiety during this period. He always seems put out or on his way to an event, premiere, private club or hot spot. I wish he took his role more seriously, a job he claimed he could do very well. Passing out water bottles is merely a start. More immediate action needs to be implemented.

Sounds like the likely arsenic culprit would be from construction from ERP as the soil is loosened except since the drought has been ongoing all summer there has no significant rainfall to leech into a possible broken main. So far only the JR houses have tested positive. In that case the possibly the arsenic has been lying dormant in the pipes/ joints/ solder. Something caused it to be released- water pressure, high temperature, high acidity. Just a guess. people's heads explode when these old buildings get demolished but many are just toxic waste sites containing massive amounts of lead, asbestos, arsenic, formaldehyde and god knows what else.

Btw, health nuts who eat a lot of brown rice are eating a lot of arsenic. White rice, somewhat less. Rice that comes from you know where is grown in paddies that are loaded with arsenic. Google it rice lovers and see for yourself.


First, the 57 acre park and its hundreds of mature, irreplaceable, healthy, water absorbing, air cooling and cleansing trees are destroyed.

Then, water is unsafe to drink and lack of general building maintenance continues...

Will NYCHA housing be condemned?
Will thousands of homes be taken away to build waterfront luxury high rises along the East River? Hope I'm wrong.

Unfathomable lack of immediate and relevant information being reported by the authorities on this.
The information as delivered would suggest that it's an issue related to water inflow equipment at these properties.
I mean, if it's a water source issue, then the problem is everywhere. Not just at these buildings.
But again, nobody is talking.

I would encourage everyone to buy a Zero Water Filter, which can be purchased at Home Depot on 23rd Street between 5th and 6th Avenues. Follow the simple instructions and start drinking water without toxic chemicals. Replace the filter every three months.

Levels are important. 10 ppb (parts per billion) is considered safe. 11 ppb is unsafe. What are the levels and have they developed a list of likely sources?
The municipal water is tested several times on the way to the tap. Where is the closest testing station that is reading at safe levels? Has anyone tested outside of the NYCHA buildings?

Has anybody in other buildings located in the neighborhood had their water tested?
If so, please post.

One possible culprit is the huge amount fo waste that leaked into the ground from the old Gashouse District, which was just north of Riis Houses, where Peter Cooper Village is today. The gas, which was used for light and heating, was produced by burning coal, and arsenic, lead and mercury are all byproducts of coal burning. Throw in all the years of construction around Riis Houses likely disturbing the water pipes, and a crack in a water main could lead to contamination from the very contaminated soil which pervades the neighborhood. I've always wondered when this toxic wasteland we are all living above would reveal itself again, and perhaps it finally has.

Sept. 4 9:14: You bring up some interesting points. I've been trying to read up on how this could happen and there's an interesting EPA article on how arsenic can bind to deposits in old pipes and then be released when those scale deposits flake off. Prior to 2001 the quantity of arsenic allowed used to be five times higher than today so perhaps this accumulation and later release explains it.

Of course, it would be great if our elected officials could speak to the topic: releasing the test results for Riis as well as neighboring sites to inform the neighborhood if this is an isolated problem and the scale of the contamination. But it is a holiday weekend and these fearless unbossed champions of the people have other things to do.

Yes, that’s a crazy idea. Everyone but the most incredibly simple-minded people can be concerned about more than one thing at a time, and it’s clear that a lot of our infrastructure here is crumbling, not just in public housing (which is particularly poorly maintained) but in the city as a whole (flooding in the subways when it rains, etc.).

Reform movements, such as the one started by Jacob Riis's 1890 book “How the Other Half Lives”, continued to attempt to alleviate the problems of the area through settlement houses, such as the Henry Street Settlement, and other welfare and service agencies.

There are a couple of posts here with questions pertaining to how exacly arsenic ended up in an isolated location. I tead the level was 12.