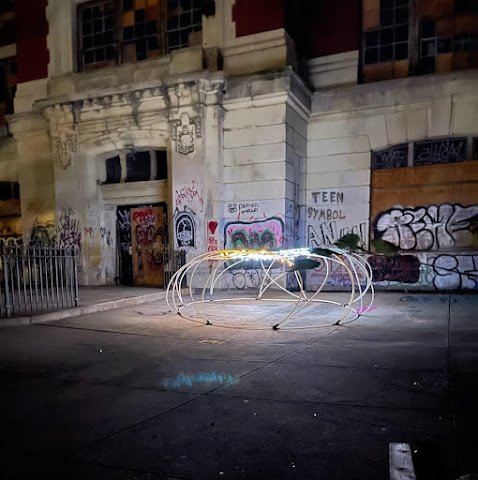 Photos by Kenny Toglia
Public art has returned to the former CHARAS/El Bohio Community Center on Ninth Street/10th Street between Avenue B and Avenue C.
There's a new installation on the property titled "Pumpkin Dome" via the Buckyteers, a radical art/engineering collective. The group is reclaiming the space for the community "and tells big real estate to back off," per a statement. 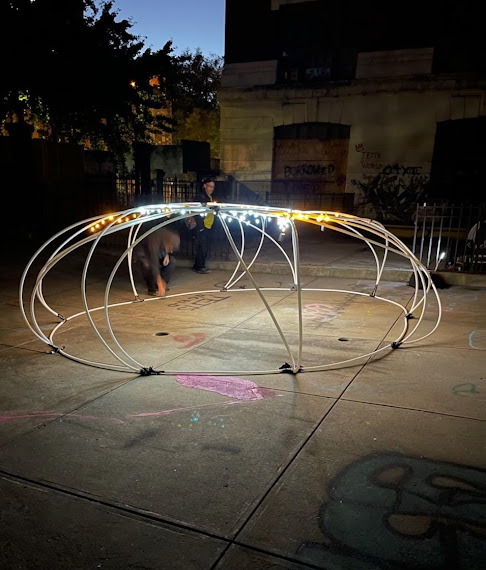 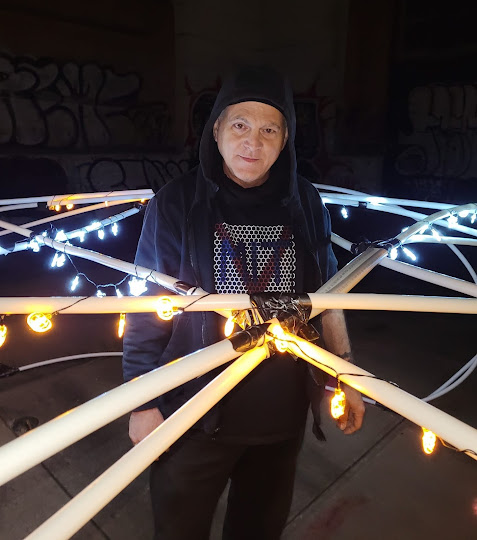 The five-floor building became the CHARAS/El Bohio Community Center after P.S. 64 left in the mid-1970s. New landlord Gregg Singer reportedly evicted the group in December 2001. He bought the property from the city during an auction in 1998 for $3.15 million, and it has remained vacant for 20-plus years.
There is a continued call to return the building for community use.
Meanwhile, Madison Realty Capital has moved forward with a foreclosure against Singer ... and, as we first reported, the building is now being pitched for use as a medical facility or for educational purposes.
H/T John Penley
Posted by Grieve at 8:00 PM

The irony of this is the fact that the Museum Of Urban Reclaimed Space MORUS cannot actively support this or any actual building squatting because of their 501C3 Not For Profit status. The same goes for ABC NO Rio which has 10 million dollars sitting in a bank.

A beacon of hope!!! For over 20 years Charas/El Bohio was withhold from our community by a profit-oriented speculator. It's long overdue to get it back. And the City should now step by to rehab the building and to add reparations for those 20 years of depriving the neighborhood. Wonderful artist action!!! It inspires and nourishes hope in these gloomy times!!

Hope this finally bodes well for things to come -

John, I think yr wrong on that. MoRUS I think dsn't have 501c-3 status (yet), and the NYS non-profit rules state that inst'ns with that status cannot support electoral campaigns; but I'm fairly certain they can take political positions. BTW what are the politics of occupation? The politics of commonsing? https://en.wikipedia.org/wiki/Diggers