Preservation of the Provincetown Playhouse not going so well so far 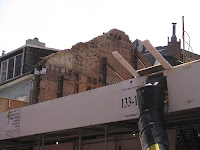 "The preservation of the original Provincetown Playhouse within a new building that New York University is constructing at the MacDougal St. site was put on hold on Aug. 18 after neighbors discovered that part of the historic playhouse wall that was to have been preserved had been removed." An outraged Andrew Berman, executive director of the Greenwich Village Society for Historic Preservation, said: "What’s unfortunate and clear is that N.Y.U. has yet again been caught in a lie, the lie that they would preserve the walls of the theater in their entirety." For its part, an NYU official apologized and said that work will cease until a report can be made to the community. (The Villager)

Previous Provincetown Playhouse coverage from The Villager. Washington Square Park has been all over the story as well. And BoweryBoogie, photo via BB too.
Posted by Grieve at 6:51 AM

Thanks EV Grieve for the update and the link!