If you depend on the bus around here, then you're kinda screwed now

Well, we're in Day 3 of the MTA's Screw The Passenger campaign Service Changes due to the agency's $800-million deficit in their operating budget. 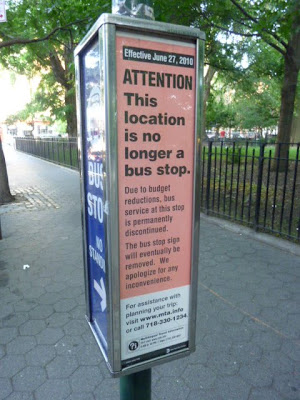 So! There was a little confusion on Sunday, as you might expect. Like why was this guy waiting for an M9 on Avenue B when service has been rerouted to Avenue C? 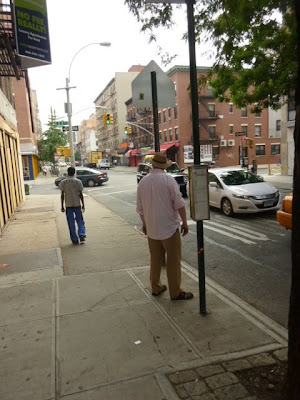 Why was the 14D running on Avenue B? And how did that guy figure that out? 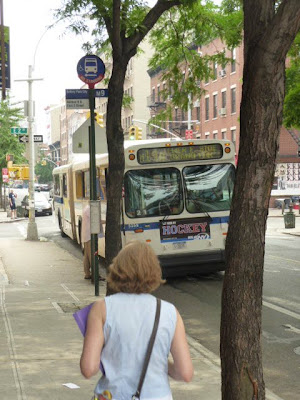 Why hasn't the MTA posted the new route times? For instance, the new M9 stops on Avenue C still list the times for the M21. 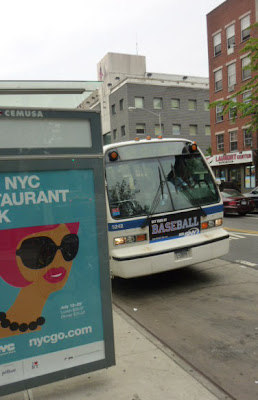 Anyway, it's a little confusing. You have to read the fine print. 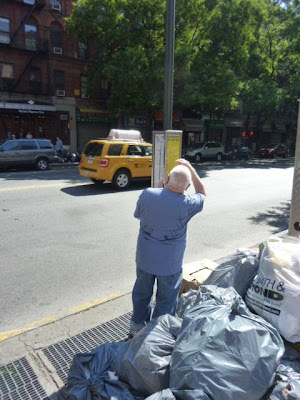 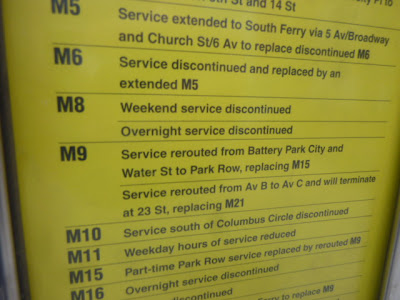 Here are the changes via the MTA. 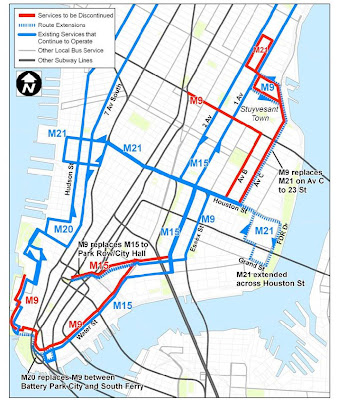 The M8 weekend and overnight service has been discontinued.

The M21 weekend service has been discontinued; the late-night service will end earlier. Ditto for the early-morning service.

The M9 service has been rerouted from Avenue B to Avenue C to replace the M21 and will terminate at the VA Hospital on East 23rd Street.

The M9 service has been discontinued along Water Street and in Battery Park City and was extended along Park Row to City Hall to replace the M15.

Which means the M15 service to City Hall via Park Row was discontinued and replaced by the M9.

M21 service was discontinued north of Houston along Avenue C and extended along Houston and the FDR to Grand Street.

so where does the M9 go now after it hits houston? does it go down houston to the west vside on the old m21 route? i cannot BELIEVE they got rid on m8 weekend service. bastards!!!

Good question, Glamma. From the map, looks like the M9 sticks to its old route after hitting Houston... a left on Essex and down to East Broadway... and a left on Chatham Square...and eventually down through PP to Park Row.

Re the M21: I had been saying for years (prob even wrote the MTA) that there should be a bus that just goes back and forth on Houston, to make connections and get us back and forth, similar to the way the 14th and 23rd St. buses operate. That bus was infrequent and rarely on time.

Hate that they're canceling the wkend service, but if it runs enough, it might not be as empty as it's always been.

The M21 does not run frequently to be considered a M8 or M14 style bus at all. Even w/ the new schedules. Check them out, they're online.

As for the new M9... the schedules posted dont even specify ANY times from 23rd St until Houston. REALLY frustrating if you used to rely on the M21 to get to work like me. I have no idea when to go to my stop in the morning now (8th and C)

I HATE THE MTA. Taking away both weekend days of the M8 is absolutely unconscionable...how are people supposed to go shopping on Saturday? Fuckpigs.

And does the M15 change mean I can no longer get the bus at 3rd Avenue and Cooper Union to go straight down to Chinatown? Or what?

Oh, and Grieve, for some reason the visual verification thingy is, for me, always a broken link, for several days now. I have to post my comment THEN get an error message and only THEN do the words show up. Glitchy.

let's face facts. the MTA is just doing what is long overdue.

there are 3 lines; they all run east to west they all can be caught on c and 10th and within easy walking d. within each other.

the m8 has like 1 passenger if that on it at night and the weekend riders still has the 14d bus which is huge bus that is not even close to filled on the weekends.

Sorry about the Blogger snafus. I noticed a few bugs myself. There seem to be issues at the Mothership. I'll see if any other Blogger users are having problems.

They put schedule change pamphlets on all the seats on the M8 on Monday morning.

The people who suffer from this the most are the elderly who can't walk to 14th, and can't get down the subway steps easily. And of course me, since the world does revolve this way--they reduced the number of trips in the evening rush from 5x/hour to 3x/hour making it almost always quicker to walk cross town than to wait for the next bus.

Plus, this latest round of M8 drivers are way less friendly than the last rotation. My driver today couldn't answer a question about the new schedule and was all annoyed at being asked. I wonder how/if the changes impacted their jobs.

The new service pattern is a complete waste of time, money, & resources. I have been looking at the M9, M14, and M21 routes for years. The M9 IS needed along Avenue B and to Union Square. The M9 was a perfect backup to help out both the 14A & 14D buses.

The M21 being a weekday-only Houston Street Crosstown is one of by far the dumbest routes ever devised. The problem with that is people who live in those NYCHA buildings want 14th Street, not Houston St. The M21's old route worked perfectly and thus should not have been tinkered with.

The M8 is a route the TA could do without. I mean, what is the point of having three crosstown services in one area?

Whoa! Grieve, careful, that's especially unfair. "Screw the passenger?" If anything, Albany screwed the passenger when the took away $143 million in dedicated tax revenue for the MTA that came from the payroll tax and cab surcharge the Governor signed off on last year. Not to mention the Assembly forced the MTA to pay for student Metrocards with no additional assistance from the city or state so they could get cameras to enforce bus lanes. It's absolutely disgusting how much Albany is digging the MTA's grave, but they know they can get away with it, because everyone just blames the MTA and lets our elected officials off scot-free.

By the way, Nick, the toll would mean a faster drive over the Williamsburg - fewer people would take unnecessary car trips into the city, and the toll would be collected electronically via E-Z Pass and bill by mail - no toll booths.

True, Nick... It's a little TOO easy and convenient to blame the MTA for everything... and that was a cheap shot that I took...