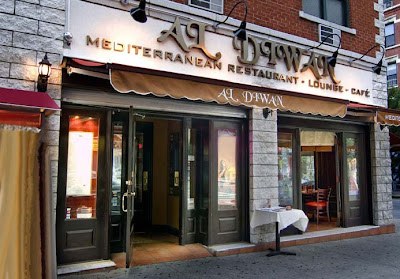 So, as I was saying, the CB3/SLA committee granted the transfer of Al Diwan's liquor license to Percy's Tavern on Avenue A and 13th Street Monday night...

The Percy's folks were turned down last month...However, they returned with a stronger concept and better community outreach. The owner, Larry Watson, has lived in the East Village for 25 years, arriving here in 1986 to work as a building super on 11th Street and Second Avenue...

Watson handed out packets to those sitting around him... inside was all the background information a blogger neighbor would want... According to his bio, he moved here as a single father and raised four children, all of whom attended PS 19 on 11th Street... Per the bio: "I love this neighborhood and would never do anything to compromise all the years and continued effort that was put into our neighborhood. I have supported Father Pat Moloney and St. Brigid's with cleaning up and maintaining this area."

His mission for Percy's, which is named for 19th-century entertainer William Percy French: "To become such a vital part of the community that Percy's will be the standard."

The chef was on hand, and he said that he aspires to be like Northern Spy around the corner on 12th Street. And he mysteriously wouldn't name the Michelin-starred restaurant where he currently works out of fear of losing that job. (Watson said everyone will be suitably impressed when they hear where he worked.)

In a letter to the CB3, the president of the 13th Street Block Association gave Percy's a rousing endorsement, citing his community outreach and promise to be a good neighbor. Among other things, he vows to close the sidewalk doors at 10 p.m. nightly while the sidewalk tables will be removed at 11 p.m.

Looking at the menu now... bar snacks include pork skins...smoked mackerel on rye... pork cheeks on toast for lunch...they'll also be open for brunch on weekends...

Meanwhile on Monday night... Forbidden City, right next door to Al Diwan on Avenue A, was up for a renewal of their liquor license ... Committee chair Alexandra Militano mentioned that CB3 had just received more than 20 additional complaints about Forbidden City, ranging from patrons making noise, obstructing the sidewalk, drinking outside, vomiting, peeing, etc., etc.

Plenty of nearby neighbors were there to speak out against Forbidden City, which is on the ground level of a multi-use building. Said one 22-year resident: "It has totally destroyed the quality of life in the neighborhood." She said that she made it a point to be in by 10 p.m. on a Saturday to avoid the crowds along that stretch of Avenue A... One resident said the patrons were "sketchy characters" and the place was, overall, "really unbearable."

One of Forbidden City's upstair's neighbors recalled the night last summer in which the bar's off-duty bouncer, Eric "Taz" Pagan was murdered... The resident recalled the horrific imagery of seeing paramedics trying to revive Pagan on the sidewalk. "The scene was just horrible. My daughter asked me what happened. I couldn't tell her. I lied and said that it was some roadside repairs."

(Committee members and the Forbidden City reps said the shooting had noting to do with the bar.)

During all this, three representatives from Forbidden City stood there rather awkwardly, waiting for their turn to speak. And when it came time to talk, well, they seemed a little disorganized and defensive. Several of the neighbors talked about the bar's recent DJ competitions, which have drawn huge crowds. The bar reps foolishly tired to describe exactly what this is ... "It's not a competition ... it's a DJ showcase." Ah, well!

The bar manager said that this was his first managerial experience... the owner asked the committee for their advice on how to keep the sidewalks clear... everyone got a lecture from Militano, from the residents who waited until right before the meeting to register complaints... to the Forbidden City management for failing to be proactive.

After nearly of an hour of all this, the committee denied Forbidden City's request for a renewal... it now goes to the full CB3 board on June 22...

I bailed after nearly four hours and four items... there were nearly 30 more on the agenda... Eater correspondent Gabe Ulla gamely stayed until the wee hours...

As he reported for Eater:

* There was plenty debate for SRO... the grotesquely named new eatery proposed for the former SRO at the Bowery and Stanton... "the board wasn't exactly fond of Olsen naming a swank wine bar in an actual SRO building -- SRO ... But like the board concluded in the end, it's a changing neighborhood and there's little they can do to stop that." Approved! (Read BoweryBoogie's coverage of this place here.)

* A new eatery was approved for 40 Avenue B, the short-lived Dominican restaurant Chabela's. The place will be called Little Printz Cafe, a "global Jewish" restaurant that will serve breakfast, lunch and dinner.

* In other items from Eater, One and One and Spina were approved for sidewalk cafes while TKettle on St. Mark's Place was denied their beer/wine upgrade.

Previously on EV Grieve:
CB3 deadlocked over new "fast-food Italian" at former Graceland space; 7-Eleven next?
Posted by Grieve at 6:50 AM

Shame about the fish monger. It is definitely time for Stetzer and Militano to be changed out for fresh blood. They have been there too long and have to much self-interest and belief in their own "power."

They are both obnoxious and belittling. Just like the neighborhood the board needs fresh blood.

Forbidden City was one of the few places along that stretch I actually liked, though it seemed to have gone downhill a bit on my last couple of visits. Probably the new management.

My guess on the mystery chef is that he's coming from Spotted Pig.

Oh and you didn't mention the best part when the builder of Red Square said it was a mistake to have built it.

I know! Michael Rosen said something about community something or another... and McWater had that shot: Considering you were responsible for Red Square.... that was in credible moment... I got distracted by the people around me talking.

Do you remember the phrasing?

I wish I could remember what brought it on, or exactly what they were talking about, but Rosen was responding to something one of the committee members said. He said something like: as a City Planner I can tell you that you are wrong about... (whatever it was she was wrong about).

Then McWater said that it was ironic to hear this criticism coming from the guy who built Red Square which has seven chain store retailers.

Rosen tried to defend himself, but there was so much shouting about the shouting that he had trouble getting a word in. I heard him because I was right behind him, listening carefully. He said: It was a mistake to have built Red Square. It never should have happened.

His disavowal of Red Square appears not to be new news, only that I never knew anything about it before.