New vegan cafe for Avenue B 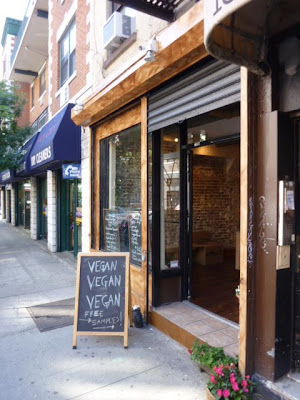 A new vegan cafe called The Little Bird opened last Wednesday on Avenue B near 11th Street (at the former Panache Cafe)...

I asked proprietor Joanna Troccoli via e-mail what people can expect here...
"As for now it is just the vegan baked treats, coffee and teas. I make everything in the back. All the cookies, granola, and treats are vegan."

This is the first commercial outlet for Troccoli, who runs The Little Bird with her sister and brother-in-law. "But I have been wholesaling the cookies to local stores like Earth Matters, Liquiteria, Jack's Coffee, Gimme! Coffee and Kula Yoga."

She'll expand the menu in the coming weeks to include small plates of vegan fare. "We are also working on getting a beer and wine license to serve ORGANIC beer and wine," she said. "But that is in the future!"
Posted by Grieve at 6:50 AM

Email ThisBlogThis!Share to TwitterShare to FacebookShare to Pinterest
Labels: Avenue B, new cafes