On second thought: No to the fishmonger for Avenue A 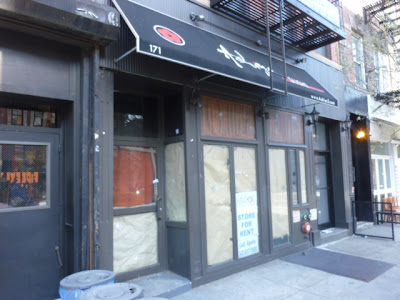 At the April CB3/SLA meeting, the committee approved a full-liquor license (within a resolution area) for Keith Masco's seafood market/restaurant/high-end cocktail bar at 171 Avenue A.

As you'll recall, Masco will sell fresh fish in the front of the space during the day ... with room for 48 diners in the back along with a bar selling specialty cocktails. He also has plans to utilize the 400-square-foot garden in the back. (Forgot to mention what the place would be called: Sea on A.)

However, the full CB3 rejected the plans. So it was back to the CB3/SLA last night ... and Masco returned with more signatures of support... and he said he will expand his retail counter from 9 feet to 15 feet to show that he will be a retail operation, selling fresh fish from 11 a.m. to 8 p.m.

Again, while people generally like the idea of a fishmonger in the neighborhood, the opposition remains... residents do not want another liquor license on this section of Avenue A. There are now six of nine storefronts on Avenue A between 10th Street and 11th Street that sell beer, wine or liquor. This would make seven. One longtime resident spoke about the importance of having retail diversity, not just bars and restaurants. The density of bars is creating an unhealthy balance in the neighborhood.

Michael Rosen, a founder of the East Village Community Coalition, was also on hand to speak out against another liquor license. He discussed how the saturation of bars changes the nature of the community.

In the end, the committee rejected Masco's application after approving it two months earlier.

I have to stop and actually do some work, but wouldnt a fishmonger be some good diversity? I was really psyched about this, it would be perfect to get a piece of fish on your way home. High end drinks are a bit different than the superdive model also, so, whats the problem here. Eat seafood while you can, before BP kills it all..

Thanks, Hey19... based on previous comments about Keith's plans, many people seem supportive of having a fishmonger here... But. Not on that block, necessarily. Some people said: Good concept, wrong spot.

And there's the fear once someone has that full liquor license.... when a gay-and-lesbian themed bookstore/cafe becomes Superdive.

Eh, perfect location for me, I dont know what people want, but this seems pretty innocous, I dont know how these regs work, but there must be some protections against the bait and swtich, GLBT bookstore - superdive gambit.

before for it was a gay-and-lesbian bookstore it was Korova Milk Bar, the Raven was on the corner and The Cock was across the street. Bars aren't new to that block. Did people dislike it as much in 2004 as they do now?

I've been speaking to local residents about how they feel about the bars and they are overwhelmingly not in favor of having any more bars, if they stop to think about it at all. Generally people don't think about it too much. Those that do are the ones that have been really disturbed by it personally – ie not being able to sleep through the night due to the noise or the loud music, or can’t get to their front doors due to the crowds.

Also what I have noticed is that the changing demographic of the EV has created a divide between the transient students who go to the bars, have no investment in the neighborhood as a place to live and raise a family etc., and just want to party and meet their future (or one night) mate, and the permanent residents who prefer something a little more adult, which these new bars do not cater to.

Every article I've read about healthy cities designated as mixed-use areas like the East Village is that there should be a balance that brings in money from the outside (importing) but still provides the services that residents need to maintain their quality of life. When that balance is off, you have unhappy people.

Some people talk about living in the city is supposed to be the party zone (ie why did you move here if you are afraid of the noise; or why don't you leave if you don't like it) but to me that is an empty argument. The city can't and shouldn't be one thing, with that thing being bars. Replace bars with shoe repair stores. I wouldn't like it if that was all we had either - all those people with broken shoes walking around barefoot waiting for their shoes to be fixed, but no place to buy lettuce. It would suck.

There are many reasons people gravitate to the city, and it’s a choice we’ve made to raise our families here at the expense of not living the American dream with the white picket fence and a 2000 square foot house in Alabama, and that is the convenience of living in a city that goes far beyond having 19 choices of bars within 500 feet - like not needing to have a car to do shopping, groceries, laundry and shopping that is nearby, a tailor who knows how I like my pants hemmed, neighbors that I chat with on the street, and an urban experience that is diverse in all ways. It's not just the bars, which is what the conversation always comes down to recently. Our retail surroundings define where we live and the experience we have every time we leave the house. When it is all bars all the time, it is at the exclusion of all the other things we love about living here. Being serenaded on the corner the other day by Jolly who was carrying around his guitar was the highlight of my month! I wouldn't want to live without concerts in Tompkins Square Park or neighbors and friends that are poets, painters, hat designers, film makers, potters. I would also like a convenient place to buy lettuce.

And finally, the reason we license bars and restaurants is because as sellers of a controlled substance they have a greater responsibility to the community than the shoe repair guy. The Community Board’s SLA committee is designed to keep their eye on those responsible and ensure that they are following the rules. It’s a healthy, if too overly long, debate every month about what is the right balance for our community, and all voices are encouraged to participate. Giving all sides the opportunity to express their opinions on the matter and work through ways to make improvements can only be a good thing.

Ok - get ready for my very long response. Sorry in advance. I'm boiling over from some heckling jerk at last night's meeting.

It seems to me that people in this area just recently woke up and realized how much Ave A has changed while they weren't paying attention. The success of all the new bars is a mixed blessing - everybody wants nightlife, no question, but I think the feeling is that there is a saturation level where the overall day to day quality of life has diminished to the point of aggravation, coupled with the loss of a variety of businesses that used to exist.

Depending on where your windows face you can have a very different experience with the noise. The narrow streets, even narrower back yards, and 6-story (and getting higher with each new construction) buildings create canyons of sound that was not a problem a few years ago. The smoking laws and cell phone use have not helped in any way, drawing people outside when they didn’t used to. I enjoy the nightlife of the EV many nights a week, rarely leaving the ‘hood, but I don’t feel like more bars will increase my nightlife experience, there is plenty to choose from and they are ever changing as it is so hard to have a long term successful business of any kind with the high overheads required here.

This is why the fish guy is a difficult thing - there is nobody who doesn't want a fish store (except Sylvia Earle), but the other side of the coin is that to get a fish store the community has to agree to yet another bar on a block that already has six. One step forward for two steps back.

I agree w all this, wouldnt a fish monger and mixologist be more of an adult place than some of the others? I mean, maybe its naive, or maybe I dont know the demographic that well, but hopefullly, over time, with some good selections like fish mongers etc, you can change the neighborhood to something a bit more refined and diverse. Hopefuly they even take business away from some of the crap bars in the neighborhood. If this guy is true to his plan, this seems like a diversifying, adult place. Which shouldnt be rejected simply because they sell drinks. Just seems simplistic to lump this in with some of the other places in that hood. Some retail would be nice, but maybe you start w some quality restaurants, and fish mongers, to change the demographic of the area.

Personally, I would like a fishmonger who also repairs shoes.

We have been working to stop the fish guy for sometime now after getting blindsided in April.

Besides 171 Ave A was where the Beastie Boys recorded their first album and it should be a record store or something cool like that.

done w/ the bars, but since fish place on first ave and smelly victors closed there has been nothing else. we need to get protein w/o big cholesterol yo - we neeeed a fish place - a real good clean fish place (scuse me: a cool record store???) - enuf bar pruppie bs - eat good food - live life.

vh is cracking me up - me too - shoes and fish!