No Five Guys for 171 Avenue A, but the fishmonger is back — and with a Plan B 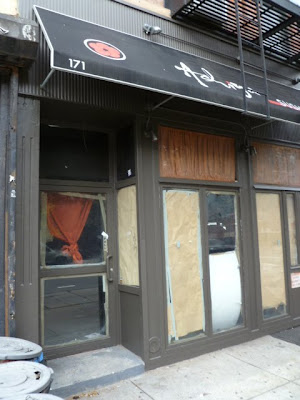 So, there won't be a Five Guys coming to 171 Avenue A. (However, we're certain to see them pop up somewhere else in the East Village.) After that post, a tipster said that the fishmonger was coming back...

Indeed, Keith Masco confirms that he is moving forward with his plans for Sea on A in this space despite his last go-around with CB3.

At the April CB3/SLA meeting, the committee approved a full-liquor license (within a resolution area) for Masco's seafood market/restaurant/high-end cocktail bar at 171 Avenue A.

Masco will sell fresh fish in the front of the space during the day ... with room for 48 diners in the back along with a bar selling specialty cocktails.

However, the full CB3 rejected the plans. So it was back to the CB3/SLA in June ... and they denied his applications.

Via e-mail, I asked Masco if he was amending his original plan that the CB3 denied.

"We are going ahead exactly as planned. I see no reason to bow to the communists at the community board. My business plan is perfect, it is exactly what the vast majority of residents here want and need."

"If the SLA doesn't see it the same way, I will be locked into a ten-year lease anyway. So if that be the case, I will give the under-represented and underage residents something they don't have — an all ages 24-7 diner/arcade. Having raised two children here, I know there is absolutely nothing for these kids to do, and by kids I mean even 18-20 year olds, whom despite having thier own apts, can't even hang in the park after midnite. We would have an entire dessert bar and juice bar as well. It will also be a great place for all those AA people who can now hang in an alcohol-free bar."
Posted by Grieve at 7:00 AM

Email ThisBlogThis!Share to TwitterShare to FacebookShare to Pinterest
Labels: 171 Avenue A

Let the games begin, sir. By the way I live above your venue and no one here wants it. Nor on the block.

Now a 24 hour arcade, that would be sweet, bro! Are you gonna have Donkey Kong? That game is really hard.

I LOVE THIS MAN. People need to start realizing that new business is a good sign! Bravo!

I want a Genius Chicken. Oh and by the way, dude, the reason kids "can't even hang in the park after midnight" is because technically EVERY park in NYC has a 12 AM curfew; please stop making it sound like fascism akin to that of a gulag. And it is painfully obvious you really don't know the neighborhood, so who the hell are you to tell us what "the vast majority of residents here want and need"? We certainly don't want an arrogant P.O.S. like you, who resorts to name-calling when you don't get your way. So the community board wants a say in what goes into the community? So their vote doesn't go your way? Boo-fuckin'-hoo. Grow up, get over it, and get out of the East Village. You won't be missed, there's plenty of assholes lining up behind you to take your place.

I don't want or need a fishmonger/specialty cocktail establishment. What a stupid idea.

@Lisa: What's a Genius Chicken? I like that name!

Marty - There used to be an old arcade on Mott Street near the Bowery end; one of the attractions was the Tic-Tac-Toe chicken, a.k.a. the Genius Chicken, which spent the day in a glassed=in cage and played T-T-T against all comers. No matter how often my friends and I tried, we could not beat the damned thing; it won every single game we ever played against it! It got grains of corn after winning a game, guess that was a powerful incentive for it. Still have no idea how they worked that one, but it was fun. (Oh and I asked once, cos I was concerned about the chicken's well-being - at night it was taken home to the arcade owner's apt. and slept in the kitchen.)

From the Chinatown Arcade. It played Tic-Tac-Toe with you by standing on an electrified grid. It learned by Pavlovian response that pushing the button with it's beak would turn off the juice.

I've designed a similar system for installation in the PETA offices, (or possibly in the bike lanes)

Much excellence here. Though I agree that Masco is an arrogant POS, I love his characterizations of CB3 as commies and the SLA.

And I do really want a fishmonger. WHole Foods fish sucks and Citarella is ridiculous (and too far).

LOVE Anonymous 11:50am's idea for electrifying the bike lanes. Too bad tires are rubber and non-conductive. Perhaps some other device for training the recalcitrant pedalers? Maybe one of those swinging arms that knocks jousters off their horses?

A 24/7 diner with arcade games and a genius chicken? Yes, please!

Dear Shawn Chittle and others who oppose...

You are shutting down the whole E Village community from having a fresh fish market/restaurant...all because they serve alcohol? YOU LIVE IN NEW YORK CITY...oh and let me add to that...YOU LIVE IN THE E VILLAGE.

If you dont want restaurants and establishments as simple as these, then hit the suburbs guys. All these restaurants bring character to the city and shutting down businesses like this SURE DOESNT HELP THE ECONOMY GET BACK TO WHERE IT SHOULD BE. I still have a hard time believing there has been so much fuss about a simple fish market/restaurant, something that there is not much of in this part of the city.

I would love a great fish market. But I don't know. I mean, I'm not Lisa, who embodies the east village. I'm just a normal resident who doesn't feel entitled to push my agenda as the voice of the entire neighborhood. There are enough of you for that!

Bring on the fish!

i don't like this guys attitude and we don't need another restaurant bar. p*ss off westward, masco.

@Lisa: Thanks for the Genius Chicken explanation. That has got to be one of the greatest things I've ever heard of. I have to go Google it and see what comes up.

Anonymous 4:15 - Believe me, if all this guy wanted to do was open a fish market I would welcome him with open arms; I walk by 165 on a regular basis to check out the bagel store's progress, and look forward to their opening. If he wanted to open a fish market and low-key restaurant I might not even care. But what I find so ridiculous is his wanting to shoehorn a restaurant AND "high-end cocktail bar" (shorthand for "magnet for NYU students with fake IDs") into the same space. Anyone with one working brain cell knows damn well his plan is to make the majority of his money selling alcohol, but the neighborhood, in case you hadn't noticed, is already drowning in venues selling alcohol. But then again, 4:15, utterly bereft of imagination and wit as you are, not able to come up with anything more original than that tired, threadbare cliche of telling those of us who object to move to the suburbs, who actually claims in seeming seriousness that "this part of the city" doesn't have many restaurants (!!!!!) - I have no doubt you will be living back in safe, dull, quiet Peoria while we're still here fighting for the rule of some kind of sanity in the EV and having to put up with the madness from Masco's fishy locale. Enjoy the crickets.

Since Masco owns several other licensed establishments in the East Village I'm a bit confounded over why he would publicly bait the Community Board who will at some point have to vote on renewals of his other venues. It just doesn't seem smart.

Is he basically saying that if you don't give him his liquor license he's going to give you 24/7 noisy nyu kids eating cheese fries and playing video games? That's got to be a threat because there's no way you can pay the rent they're asking on diner food and video games. Also, you're never 'locked in' to a lease. Those guys were offering a good guy clause which basically lets you off the hook if you fail.

Hey Mr 171. Didn't I tell you so? Contrary to what Gordon Gekko said in the original Wall Street, greed ain't always good ;-)

Hmm, a fish market would be good; but a place to teach our local young'uns to become screaming McFratabees is not so good.
Anyway, kids don't usually like to go anywhere adults create for them to go - they want to make their own space.
If it doesn't devolve - could be an interesting experiment - it will need good hall monitor/bouncers.
Good luck to the neighbors.
sign me,
close enough and woohoo weary

"It will also be a great place for all those AA people who can now hang in an alcohol-free bar."

This little throwaway line is the most obnoxious part, I think. "All those AA people"? Guess what, dude: "those people" probably don't want to be in some noisy place full of kids -- drunk kids, because as anyone who has ever been to a 24-hour diner knows, it is full of wasted people scarfing disco fries after the bars close.

Sober folks (not all of whom are 12-steppers, you ignorant cynic) usually prefer to be elsewhere, like at home reading a good book. Or working out. Or having sex. Anything but hanging out in some "arcade" with a bunch of teenagers.

Sorry man, but you sound like a jerkstore. Maybe you can open one of those at 171.

Can we get one of these on the Bowery, please, (Donkey K, G. Chicken and all)? Come on, something for the under 16 folks. Cuz we need another bar like we need a hole in the head... or rather, like Ave A does.