Rumors: John Varvatos is reportedly looking for a buyer 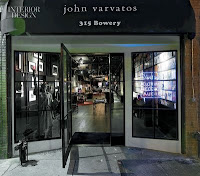 Thanks to a reader for passing along this item from The Wall Street Journal's Bankruptcy Beat blog titled Kristal Estate Open to Selling CBGB Name. The last two paragraphs are particularly interesting:

Meanwhile, there’s buzz surrounding the club’s old digs at 315 Bowery in Manhattan’s East Village, which wasn’t among the assets sold to CBGB Holdings. Men’s fashion designer John Varvatos set up shop there in 2008.

The New York Post reported this week that Varvatos, whose rock ‘n’ roll-worthy designs have been worn by Iggy Pop and Alice Cooper, is seeking a buyer to help him get out from under a heavy debt burden. The designer’s current owner, VF Corp., (which owns Lee, Wrangler, Nautica and The North Face) declined to comment on “rumors and speculation.”