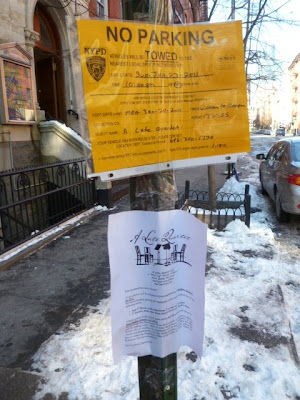 An independent movie called "A Late Quartet" will be filming in and around the East Village this winter... such as on Seventh Street between First Avenue and Second Avenue tomorrow... and later this week on Avenue C... the film stars Philip Seymour Hoffman and Catherine Keener...

According to Variety: "Story centers on a quartet whose members have performed together for 25 years and have to adjust to one of them retiring due to Parkinson's disease."

It's worth noting that Frederick Elmes is serving as the director of photography... he has worked with Jim Jarmusch and David Lynch, including "Wild at Heart," "Blue Velvet" and "Eraserhead."
Posted by Grieve at 5:19 PM

Nice to see a decent movie getting produced around here. They should cast EV Lambo. She did star in "A Car is Born" after all. (Oof!)

Thanks very much for this. I write a blog about actor Jeremy Northam who has a role in this movie (along with Philip Seymour Hoffman, Catherine Keener and Christopher Walken). There's quite a buzz about it already, and I'm really looking forward to seeing it. If you catch any more action from the shooting, I'd love to know!

where on ave c?

the only film that could have any impact around here is a film where a group of Yunnies drink tons of alcohol and snort tons of cocaine... inducing them to go on a rampage where...act one ......the rounding up of neighborhood dogs bringing them inside a luxury multi million dollar modernist penthouse ....the Yunnies stand in a circle surrounding the dogs.....first they take turns force stuffing sausage into the anuses of the dogs.... they all laugh in joy and ecstasy....act two.....the titillation..they all become very aroused by this act and let loose with there desire...a wild orgy ensues amongst Yunnies and animals....everybody becomes an animal...real hardcore....harder than hard.... super duper hard.....only they get to experience it.....it's the kind of thing that ordinary people could only dream about....

sorry... never mind I take it back this wont have any impact at all....

@jeremynorthamfanblog
Thanks...I didn't realize that Walken is in this...

@bleason
I saw signs between Sixth and Seventh