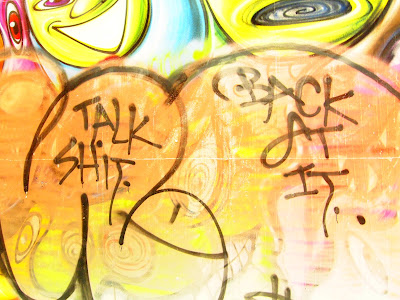 The Post checks in today with a lengthy spread on the mural on Houston and the Bowery... And if the story seems familiar to you, then you're probably right... The blogs have been on this story for a long time... Specifically, Animal NY... such as with this piece from Dec. 27 ...

And it worked. Out of respect for the names on the wall, the mural was left alone. Ironically, regular folks were inspired to write their names in pen, adding their contribution to the piece.

With the exception of a few tags, no prominent graffiti writers have bombed the Deitch wall that TWIST and company spray painted months ago in the Lower East Village, but there has been plenty of John and Jane Doe’s leaving their mark—Tumblrs included. It’s kind of ironic that vandals have mostly respected the wall, while the general public hasn’t, no?

Animal NY's Bucky Turco has more on the story here.

Credit for pointing out these similarities go to @Newyorkist ... More here. Reporter likely just got confused. Just another day in the newsroom ...?