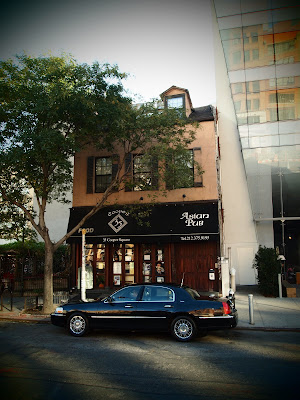 Back in early November, 35-39 Cooper Square was sold for $8.5 million ... As part of this development deal, the historic 35 Cooper Square, home now to the 35 Cooper Asian Pub, will be demolished to make way for a new development... But not without a fight... from the The Bowery Alliance of Neighbors ...

There will be a rally and press conference in front of 35 Cooper Square to save this wonderful Federal-style house from demolition and to push for landmark designation. It is one of the oldest houses left on the Bowery. In addition to its architectural significance, its important historical and cultural associations range from a direct descendant of Peter Stuyvesant to the building's much later habitation by Diane DiPrima, the most influential woman of the Beat Generation. This much-beloved little building has been both a significant participant and a surviving witness to New York City history for 200 years! Under the stipulations of the Landmarks Law, it qualifies on architectural, historical and cultural criteria for designation as a NYC individual landmark. Losing this house would be a significant loss to the history of the East Village for both cultural and historical reasons.

Jeremiah has a comprehensive history of 35 Cooper Square here.

Previously on EV Grieve:
Cooper 35 Asian Pub putting up a fight before being torn down

Cooper 35 Asian Pub part of development deal on Cooper Square
Posted by Grieve at 11:10 AM

I hope it's saved... c'mon NYC let's have a win for the Bowery after so many losses.

I wish these rallies weren't always in the middle of the work day. I'd love to go. I saw guys carrying huge boxes out of there this morning; I was afraid the clear out was already happening (but it looked like maybe just DJ equipment).

will the ZIPPIES or Yippies, hijack this cause stay tuned?

I'm excited to see what the French plan to do with this property.

When you betray your neighborhood to become a place for underage nyu transplants, you get what is coming to you.

Agree with you Anon 3:28. That shitty little Pub was just a venue for drunk little kids from NYU. good riddance.

Seriously a broken down property! You are worried that all your rent controlled appartments are next lol...you guys complain about bars and everything else why don't you just focus on finding a new place to live as surely as the day is long everything will change and only you will be living in the 1950s....historical my ass!

Ah, spoken like someone jealous that he doesn't have a single rent-controlled apartment to his name...must be another newbie.

Quite agreed with most above: good riddance. The neighborhood needs a venue for homes and jobs, and this building in its present state isn't worth anything to almost any of its neighbors. There is no real historical or aesthetic value to this place (the only mention I can find about this Stuyvesant on google was this webpage), and its just another nuiscance to attract drunk NYU kids. Please demolish with extreme prejudice.

when WWll was over people looked back and said:
How could we let this happen!

everyone please take the time to come out for this gathering

Agree with most here time to let old dogs die...I mean it's a new community now with added charm and most of us pay for our homes and have businesses here..jobs are needed no matter what and I think new hotels are better the bars and clubs for that... How it looks is not to pleasing right now but like everything it will grow on you just like my wife did

i feel sorry for your wife, but i guess you get what you deserve in life. it's too bad that you don't really like women don't feel bad though lots of men feel the way you do maybe you can find someone more like yourself there's lots of people in the area who think more like you do don't give up