The Mars Bar will be torn down in August 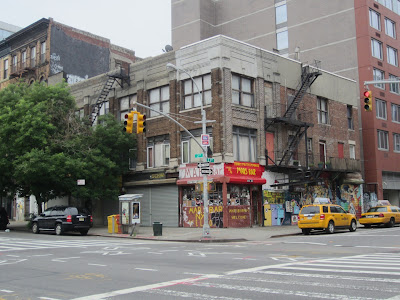 That's the word in an article posted today at Crain's New York, which provides all sorts of details on what will be happening to the two buildings at 9 and 11 Second Avenue.

Here are some excerpts from the article by Jeremy Smerd:

Ten dollars buys two cold Budweisers at the Mars Bar. For those who live above the graffiti-scarred East Village dive, it's the price of a new, luxury apartment.

An octogenarian playwright, a drag queen and a kvetcher provoked nightly by the bar's cacophony are among the nine tenants in two adjoining buildings at the corner of Second Avenue and East First Street who will receive this sweet deal.

At the end of the month, they will vacate their 1920s building, which will be demolished in August. When they return in about two years, each will pay $10 (tax free) to buy an apartment in a 12-story luxury high-rise.

John Vaccaro, 81, is the only resident here who was willing to be interviewed. He has lived in the East Village since the late 1950s; in the space above the Mars Bar since 1977.

"Look at this stuff all around us, all these high-rises. Everywhere you look. Behind us. West of us, It bothers me that New York has changed so much. It's not the New York I came to."

And one more passage:

Neighborhood blogs have covered the story with the requisite antipathy for yuppie scum. Locals have mostly lamented that the Mars Bar will come down with the building, but the protests of earlier years have given way to resignation. At a February City Planning Commission hearing, no one spoke in opposition.

"The bar's closing. Oh, well," said a Mars Bar bartender named Amy. "You move on. I dislike this neighborhood now."

Mr. Vaccaro, like his building, is old and frail. "I'd rather be young and directing shows," he said while sifting through memorabilia he is giving away. He pays $294 a month but has spent thousands renovating his space.

His kitchen, though, sits on a platform because the floor is unstable. Illuminated by track lighting, it could be the set of one of his plays, with Mr. Vaccaro playing the character who doesn't recognize the neighborhood he calls home.

And when will the Mars Bar close? The article doesn't say, but one date has been repeated in the gossip: June 30.

Read the whole article here.
Posted by Grieve at 11:36 AM

and i envy getting a new apartment for 10 bucks. though i don't envy being in that position.

and where will they be "sent" for the two years of construction? will the developer pay the rent, and the storage etc?

I wondered the same thing blue glass asked. I really dread seeing the Mars Bar torn down. It kind of represents the end of everything I moved here for.

I've had the honor of being a guest at Mr. Vaccaro's place a few years ago. He cooked myself, my boyfriend and Penny Arcade a wonderful dinner. His apartment is charming and very well maintained considering the age of the building. He is a legend and I hope they treat him well. It's so sad to see the character of our neighborhoods stripped away one block at a time like a cultural holocaust.

My guess would be that the developer hopes that in two years the current residents will have got bored waiting/have died off.

Wonder if they can will the future apartment to their next of kin.

@blueglass - a serious question. This is an eerily familiar scenario.

I bought my co-op apt. back in '89 from developers/sponsors who "bought" my building from the city for a $1.00 and then renovated it. It was a decent renovation (no shortcuts, quality materials, etc.).

There was a handful of squatters in residence at the time the sponsors purchased the building from the city. The squatters apparently agreed to leave for the duration of the renovation in exchange for the promise of an apartment once the renovation was complete. Much like the "purchase an apt. for $10" scenario cited in this article.

So, where did those squatters go during the renovation? Well, they BORROWED money from the developers/sponsors so they could pay rent and live somewhere else.

When the building was finished and they showed up to collect their "free" apartment, they had to pony up the money they had borrowed for their interim rent elsewhere first.

Which none of them had, of course.

It took years of lawsuits on both sides for the dust to settle.....

v h mckenzie -
technically the squatters had no right to apartments. if they had rights the developer probably would have given them space (not necessarily free) while they "waited". if they had rights (as does mr vaccaro), the place the developer offered might have been in another neighborhood where they had no roots, or a less desirable apartment, or many other options that were temporary and not at all home, although at a comparable rent to what they were paying (zero for squatters), until they finished the development.
however, for mr vaccaro, moving after living in one place for over 50 years will be a very traumatic event.

Umm, on a lighter note the crime rate is going up in our hood b/c of the economy ruined by the yuppies moving in. I have a better story about a home grown N.Y family raising their kids in the same city they grew up in..they opened a fantastic restaurant in the old Raven spot. And btwn 12 and 7 drinks are 5 bucks, just like Mars bar, yet with a clean bathroom and no transplants complaining about gentrification. I love reading "not the NY I knew when I moved here", the NY my great-great-great Grandfather moved to had signs in their windows that said "Irish need not Apply". Get over it, or better yet move somewhere else!

jesus. it's like reading the obits today, these posts...

I lived on 11th and 2-3rd ave. all nineties, there were great bars and fantastic live music for 5-10 bucks, by 2002 the neighborhood became like soho after all artists moved out. I think its too late for hold out like this, east village is on its way to be part of upper east side.