An update on the Greenpointing of the East Village 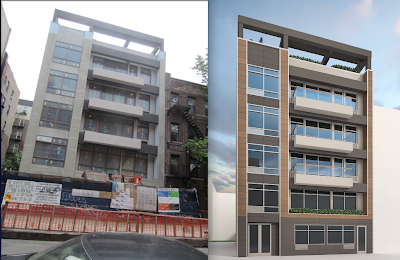 It has been four months since we last looked in on the new apartment complex rising on East 5th Street between Avenues A and B. When we last looked at the rendering, a Curbed tipster noted that it was reminiscent of the “condos going up in Greenpoint.”

Which brings us to today, where we now have a better idea of what 532 E. Fifth St. will look like. (Uh, the photo on the left.)

Well, we don’t know about Greenpoint, but the building is green, right down to the promised rooftop gardens.

And! A view of the back of the building... 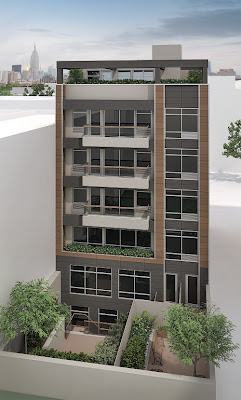 On the way: A five-story apartment building for Fifth Street
Posted by Grieve at 6:55 AM

i've read it as a Curbed hipster noted...

which is probably a premonition on the future tenants there...

I really hate to say this but, compared to some of the really horrible glass towers going up in the hood, this one is not that bad. It's sorta ugly but it also sorta fits in better than many new buildings