What's next for the the Houston/Bowery Mural Wall? 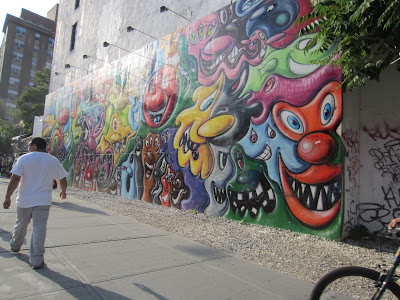 We were curious how much longer Kenny Scharf's mural would stay up on the Houston/Bowery Mural Wall. Scharf started his mural back in late November.

Now we know... thanks to this handy-dandy news release ...

Tony Goldman is pleased to announce the Inside Out Group Action: "Lakota, Dakota Nation" at the Houston/Bowery Mural Wall.

This is the sixth project at this historic wall after the Kenny Scharf spray paint mural; it will be presented on June 23, 2011. The Inside Out Group Action: "Lakota, North Dakota" will highlight the Standing Rock and Pineridge Native Reservations — some of the most important Native American reservations whose impoverished and forgotten communities have suffered unspeakable hardships. The Lakota, Dakota Nation group action is to show that the people in this community are still struggling to hold onto their native way of life.

Community leaders work with their people to teach their traditions, history, and ceremonies - knowledge which is critical to their collective survival. The Inside Out Project "Lakota, Dakota Nation" is intended to shine a light on this rich culture, for which they are fighting daily.

Inside Out is a large-scale participatory art project that transforms messages of personal identity into pieces of artistic work. Everyone is challenged to use black and white photographic portraits to discover, reveal and share the untold stories and images of people around the world.

The INSIDE OUT project is a creation of the artist JR, recipient of the 2011 TED Prize.

How will people view this project? Someone bombed the Scharf mural three times.

This is going to be amazing. JR does incredible work.

Whatever comes next will be an improvement. That Scharf mural is hideous.

JR! Great choice for the next mural.

choosing a politically untouchable topic for the wall like this one is a way to keep it from being controversial--and from being vandalized. seems like a pretty calculated move. sorry, i'm cynical about this wall and the motives behind it.

Liu Bolin, "The Invisible Man" created his latest piece using this mural as his backdrop. I caught the making of it yesterday, very cool stuff.