Every so often we venture away from the neighborhood... yesterday, we were reminded that we never ran this post after seeing the news of a planned high-end hotel near Yankee Stadium...

On a recent trip to Yankee Stadium, I was sorry to find that the Ball Park Lanes was sealed up and for sale... In June 2010, Gothamist reported that the 51-year-old bowling alley was closing for renovations. Despite an ongoing landlord dispute, they expected to be back open by the end of last year's baseball season.

So I thought that I'd find them up and running this season... but when I went to my first game late in the summer, I stopped by for a pre-game beer at the bowling alley's snack bar. 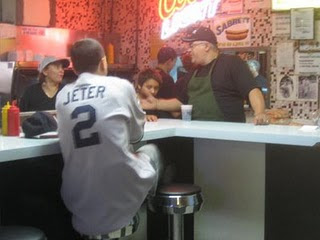 Apparently the landlord had won.

The bowling alley was directly across the street from the old Yankee Stadium ... Jeremiah put Ball Park Lanes on his endangered list before the arrival of the new stadium. (Read his post here.)

Massey Knakal is listing the space. It's going for $4.3 million. 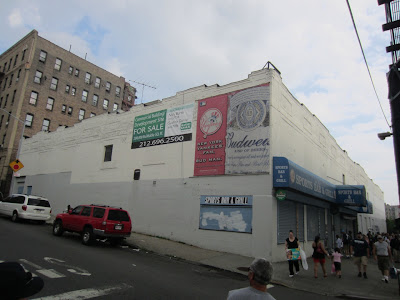 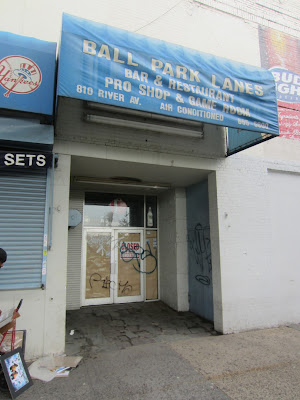 Hard to say what will come here... there is a lot of potential, as plans show. Great for community space and affordable housing — if that's what ultimately comes here. 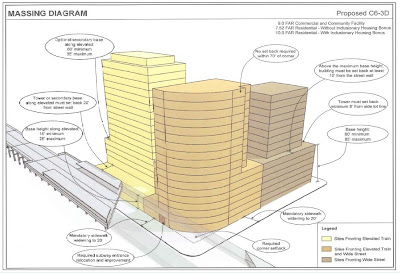 Not so good for baseball history buffs... 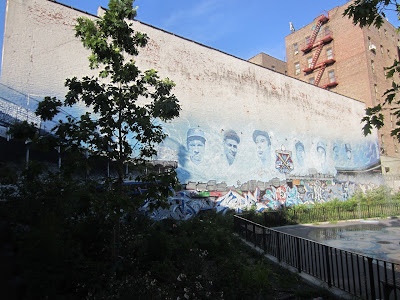 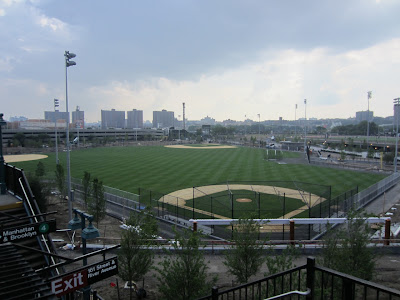 [Location of the former Yankee Stadium]

Previously on EV Grieve:
With high rises and new shops in the works, it's time to take a look at the area around Yankee Stadium

At the new Yankee Stadium

So that helps explain why almost the entire City Council went along with the new Yankee Stadium boondoggle. The new stadium was intended to be the anchor for yet another Bloomberg-y neighborhood "revitalization."

It's easy to grok now in hindsight, knowing what we now know the Bloomberg Admin has been almost 100% about. Except that it's not 2006 any more and the never ending bad economy is making the residents of working and middle class city neighborhoods very anxious. At what point backlash? Let's see Bloomberg's "vision" goes over in the Bronx.

Ahh thats a bummer, I have had some good times here before and after some games.

Bloomberg and his cronies just keep "improving" the city. Everything around the old Yankee Stadium has changed and not for the better.

There used to be a really good kosher style deli and a bakery around the corner on 161st street, but they have been gone for many years now. RIP Ball Park Lanes.

Damn I use to work there and grew up there sad

There was a friend I knew that bowled there, Cookie was his name. I called to reach out to him only to find out that they closed. My heart sank cause I lost his number and I have changed mine. Not only did I loose a great place to bowl but I lost a friend as well. Cookie wherever you are remember Vivian is always thinking of you!