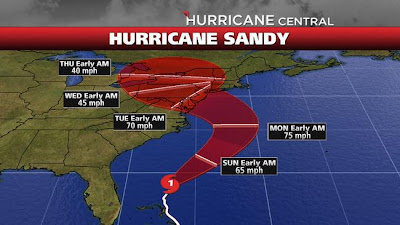 As you may have heard, there's a storm on the way, and it looks to be a doozy. Per the Weather Channel:

Hurricane Sandy, moving north from the Caribbean, remained a Category 1 hurricane early Saturday, and was expected to make landfall Monday night near the Delaware coast.

"Do not focus on the intensity of the storm, it is a minimal category 1 hurricane right now, but certainly nothing like any category1 that we have seen," said Hurricane Specialist Carl Parker on The Weather Channel. "It is a very large storm, a hybrid storm, the area of strong winds is going to be absolutely enormous by the time it come into the northeast, and that’s why it is going to be a high-impact system."

Sandy is expected to interact with a pair of winter weather systems as it moves inland, becoming a monster storm bringing nearly a foot of rain, high winds and up to 2 feet of snow. Experts said the storm would be wider and stronger than last year's Irene, which caused more than $15 billion in damage, and could rival the worst East Coast storm on record.

Sounds bad, which is why I'm leaving now for Aspen. You can reach me courtesy of Don Johnson. Good luck! Let me know how it goes!

But seriously, we'll be around to pass along any pertinent storm information...

Should I be taking this more seriously than I am? Right now I'm listening to the Met live on the radio, and reading web pages about the storm. I haven't bought any water, and I don't have a flashlight. I don't know. I think I'll be out in it, like last time, taking pictures.