The address is actually an empty lot where a 6-story apartment building is in the works... 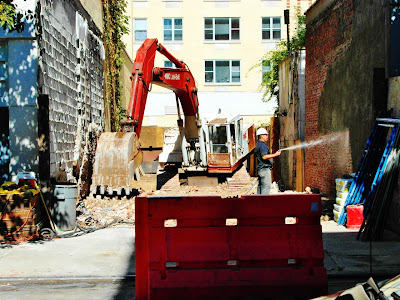 [Photo from September via Bobby Williams]

Will post an update when there is more information...

Per Gothamist News Map:
"PD does not have any perp info but the death does look suspicious in nature."

Dave on 7th sends along these two photos... NYPD on the scene and news crews arriving... 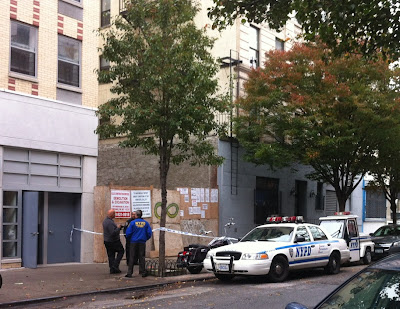 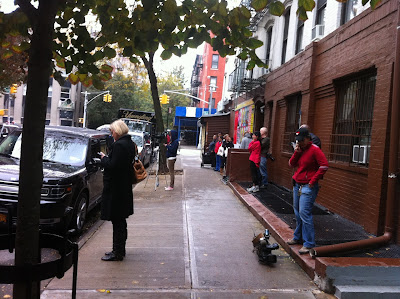 According to people on the scene, the victim is female. Police aren't saying if it's a homicide, but are trying to determine if the woman may have jumped.

"Cops said there were no obvious signs of trauma to the body. It was not immediately clear how the woman died, police said." 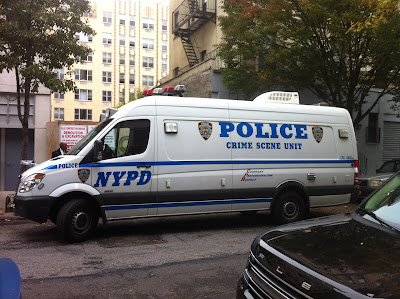 5:09
A source told us that at least one news outlet has the name of the victim, and is interviewing people on Avenue C. A reader also notes that Arcane at 111 Avenue C is closed this evening. Nearly a dozen people are standing in front of the restaurant. The lot where the body was found is adjacent to the restaurant.

An officer by the CSI truck told passersby that the incident is not being treated as a homicide.

There's a memorial outside Arcane this evening. Multiple sources have identified the victim as Christine Ebel, who co-owned the restaurant with her brother Benjamin Alter. 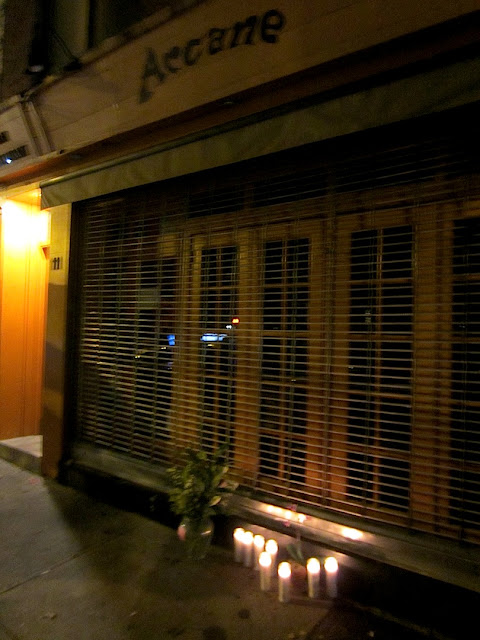 I was walking past this area last night around 720p and heard a horrible scream coming from a women. It made people on the street stop and look (which is saying something in NY.) Hmmm/

That is a bad block.

How is that a bad block?

I've lived in east village for 13 years now and presently reside down the street from where the woman was found. The whole area in general has gotten a little weird. Things always happen in all parts of the city but only recently has a lot of it started to go down so close to my doorstep - literally. Hope the police get to the bottom of this case soon. Whether or not foul play was involved everyone, particularly women, need to be more alert when walking around at night.

"This is a bad block"

Go F yourself. This block is dynamic; churches, beautiful buildings, and friendly neighbors. My shoe repair and grocer are around the corner and I will be damned if I let someone call this a "bad block."

I'll agree with you Anon 3:01. Even though I've only lived here for about 4 years, I have noticed a spike in crimes and comfort levels while walking around alone at night.

I lived on E. 6th and D for 7 years and in the past two years things have gotten bad on D. I used to feel safe at all hours in that neighborhood -not any more. Drugs sales in the open, litter everywhere, screaming in the street and general bad vibe.

That block isn't bad, but young men keep getting killed around it.

All those incidents happened on or in front of public housing. There aren't any projects on that block to my knowledge.

Great. So what happened to this woman?

Per DNAinfo earlier this afternoon:

"The woman may have fallen from a balcony overlooking the site, but police were still investigating. Cops do suspect foul play."

My deepest condolences to Christine's family who have lost a mother, wife, sister and a daughter, as well as the community who've lost a friend. She was genuinely a warm and generous person who worked tirelessly to make her business happen. I am so sorry to read about this. Words can't describe my shock and sadness. She had so much more life to live; time has been stolen from her, and I hope the thief or thieves will be brought to justice.

Only recently have "weird" things started happening at your door step???

DO YOU KNOW WHERE YOU ARE? THE HISTORY OF YOUR OWN AREA?? RIGHT NOW YOU LIVE IN A FALSE WORLD THAT ONLY LOOKS THE WAY IT DOES TO YOU BECAUSE IT IS PROTECTED BY AN ARMY OF VIOLENT COPS.. CONCIDERING THE LEVELS OF DISPARITY IN THIS COUNTRY YOU ARE SURROUNDED BY SOME OF THE POOREST, ANGIEST PEOPLE IN THE COUNTRY. AND THAT NUMBER IS GROWING WHILE YOU WALK AROUND NOT KNOWING THAT. YOU TOOK "YOUR" NEIGHBORHOOD FROM PEOPLE WHO HATE YOU AND LIVE ALL AROUND YOU. DONT YOU KNOW THAT. YES,, THE 'WEIRD" ONES DOING THE WEIRD THINGS out side of YOUR DOORSTEP I GUESS according to you.

Man do I feel sorry for you. HOW CAN ONE BE SOOO BLISSFULLY UNAWARE OF THE WORLD THEY LIVE IN?? WAKE UP... Please for all of our goods. Actually we, the poor, need you to wake up even if its only to save yourself.

My heart goes out to Christine and her family. I hope they'll get to the bottom of what happened here. This is a loss for the community.

RIP, Christine. You are loved and you will be missed.

I've lived in Alphabet City for 21 years and I agree with Jason Harris. White middle-class yuppies don't know how to deal with poverty. Things might be "weird" in this 'hood because the American economy is in the toilet and the underclass Latino and African-Americans who have lived in the EV/Alphabet City for generations are poorer than they've ever been. A rise in crime and class/race tensions are, unfortunately, inevitable when there are too many Haves living amongst the Have-nots. And right now, there have never been so many fucking arrogant Haves in this neighborhood.

About the only time I hear commentators on here acknowledge the Latino community in the East Village is when they complain that Fine Fare on Ave C is "too ghetto" for them, or that the check-out girls at Key Food (almost all Latina and African-American) are not "nice" to the self-entitled yuppies who shop and complain there. When was the last time you had to work behind a cash register, standing for 12 hours straight?

The death of this young woman is a tragedy and the perpetrator must be brought to justice. But to hear people on here come off as surprised that there's crime, or a new wave of crime, in Alphabet City...give me a break. Giuliani & Bloomberg may have been tough on crime and made huge efforts to "clean up" this area so the rich kids can feel safe to be assholes here, but the mayors didn't stamp out poverty. Wake up.

@Glenn
I've lived on Ave C for 16 years and I agree with everything you say. It amazes me how the young and naive walk the streets with such confidence and arrogance. I remember what it looked like when 9C Bar and shady bodegas were all we had. Hello! you are still in NYC not Disneyland. I still don't trust most people...and I credit that kind of guard for becoming an adult in Loisaida! You'd be surprised how many of these young fools just let a random person walk into their building behind them without even knowing who they are. Ha! That's an old muggers trick. How about being a snot nose to your neighbors...yeah real smart, don't ask me for help when you are in trouble.
Back to the real issue of this post, our neighbor Christine. This is a terrible tragedy and who knows what actually happened. The real sad part is that she is no longer with us. A real sweet heart just like her brother. My thoughts are with them. Neighbor to Neighbor.

RIP Christine god bless your family during this terrible time. So sad to hear about this tragedy, Christine always smiled and said hi to us when we passed by, we will miss your smile.

Glenn, I agree with most of what you write, but how do we make a difference? Donating to the local school (that is crumbling)? Working with NPO's that acquire real estate for charter schools servicing under-served groups (a personal favorite)?

You can start by not being so condescending, walk the streets with less confidence and arrogance, and be emphatic and human.

people with money behave as if the world revolves around them

Christine's menu were either small, kinda small, or not small. But one thing she had was a big heart. Christine was great human being; She had compassion, empathy, humility, and modesty. Something that these trust-funders and investor-fundeed rich brats clearly lacks.

Heartfelt condolences to Christine's loved ones.

But have to comment on the "omg..it's getting sooo sketchy around here!" flavor of commentary going on here. Even if you do not consider yourself "rich", if you pay $2400 to rent a studio on Avenue D., you might as well be a millionaire. It's a bit insulting to have affluent folks who are trying to "get down with the people" whilst gallavanting around the neighborhood, chasing seasonal beers and cocktails based on their moods, and wearing outfits that cost a month's work for most people. This is a poor and working class neighborhood, so don't be surprised when you are confronted with poor and working class problems. It's not all going to go away just because you showed up. Welcome to real life. Btw, if you want to make a difference, feel free to volunteer to mentor young and disenfranchised kids in the neighborhood. Put your money where your mouth is or shut it.

so you're saying leave the folks who live in poverty alone? Don't move into the neighborhood and bring services and improvements? Don't mix? Don't integrate? The Comfort Foods on Ave D used to be called C-Town, short for Crack town. It would not have received any improvements if not for the expansion of the neighborhood and folks demanding it. the bar is so low as are the expectations in that area -it's sad. People need to help the area not want and expect things to remain the same.

@anon 12:52pm
Why don't you start by going to a community board meeting. CB3 meets the third Tuesday of every month.
http://www.nyc.gov/html/mancb3/html/home/home.shtml

I don't see much of a "helping" attitude amongst the new demographic in the neighborhood (and by "new", I mean folks over the last 10 years). Many are NYU students from upper middle class families who are here to drink jagerbombs, watch football, and throw up on the sidewalk. But they are the first to go "OMG...it's soooo sketchy over here." Of course people who seek to truly integrate and help the community are a wonderful asset. The point is that it doesn't seem to be the majority contingent of the new folks moving in.

I didn't know Christine, but my heart goes out to all her loved ones- it is a real tragedy and so sad to see a vibrant and generous young lady gone so soon and so senselessly. Her spirit will live in all of you who love her- talk to each other, share your favorite memories and embrace each moment together.

Something very fishy about this whole thing. Why are they not reporting this in the newspapers and on tv. There was news that she fell of a balcony but, there is no balcony near where she was. Look at some of the pics on other websites.