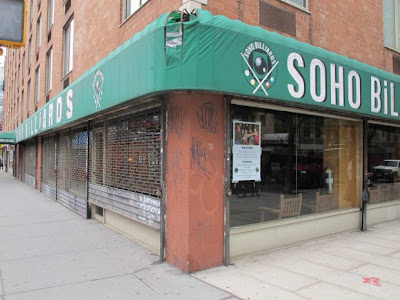 EVG regular Spike passes along this item (slightly outside our usual coverage zone) ... Spike noticed that Soho Billiard was closed yesterday ... and today, there's an eviction notice on the door... There's at least one tweet noting that they closed after Sunday. There's nothing to indicate this on their website; their phone number is a constant busy signal. 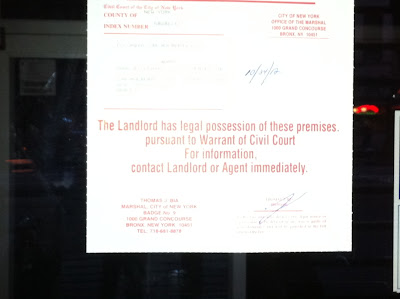 The billiards hall has been here at East Houston and Mulberry since 1990.

BoweryBoogie had this to say about them last year:

Soho Billiards is truly the last of a dying breed, and occupies what is now a substantial swath of valuable corner real estate. Nice to see this adaptation, as their presence is always a welcome counterweight to the massive invasion of haute couture.

Coming soon to a corner near you! A city block-sized billboard of David Beckham's crotch!

Used to go there a few times a week in the late 90s when I worked around the corner. Can't complain if I haven't been in 15 years but will miss it. (pouring from my 40).

this real sucks, that place was fun

Shame it's gone - good memries from here. Nothing like shooting for a few hours on the corner table in the sunlight... Thanks for those memories.

The name of this place always annoyed me, since it's clearly North of Houston.

I remember when this building went up and Soho Billiards moved in. At the time both were considered by many to be part of the unwelcome gentrification of the neighborhood.

Julian's was still in operation next to the Paladium and this joint compared the way Olive Garden compares with Ballato (to reference a nearby old school business).

Isn't that where Jeannette Lee learned to play? Used to know her back at Bronx Science in the 80s.

Jeanette visited Soho from time to time but it wouldn't be fair to say she frequented it or learned to play pool there. She primarily played at Amsterdam Billiards or in Queens.