New owner: 'My goal is to keep Eisenberg’s the way that it has been' 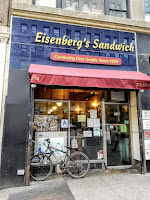 Heading out of the neighborhood for this post... on May 2, Josh Konecky and his wife Bonnie Taylor announced on Facebook that they had sold Eisenberg’s, the sandwich shop on Fifth Avenue near 22nd Street that they ran the past 12 years.

There was concern that new owners might make significant changes to the 90-year-old lunch counter — or perhaps close it altogether.

However, the new owner, Warren Chiu, tells Town & Village that it will be business as usual for years to come.

Chiu said Eisenberg’s first came onto his radar a few years ago when he lived several blocks to the north. He often ate there with his two children (now two and three years old) after trips to Madison Square Park.

"So I know the neighborhood well and I like historic, old places like this one," Chiu said. "My goal is to keep Eisenberg’s the way that it has been."

While this is his first time owning a restaurant, Chiu has a background in hospitality. He is vice president of development of Warwick International Hotels, so he’s operated hotel restaurants and bars.

Meanwhile, Konecky seemed please by his business departure. "I’m delighted," he told T&V. "For me it’s a good change."

"Everything was a fight with the city," Konecky said. "I’d never done it before. Some people (who’ve been in the business longer), they’re a little more steely to it. It just got to me."

He gave an example of how recently he considered raising prices to keep up with rising food costs, but couldn't justify doing so. "I was afraid to go to $10 for a tuna sandwich," he said. "It sounds like a lot of money."

Well all I can say is, I hope they improve the quality of the food. Last two times I ate there it was almost inedible, and for what I was getting, the price was stratospheric.

Eisenberg's is my kind of place: a classic, family owned, folksy.
Great seltzer and home made soup.