The Hayaty Hookah Bar space is for rent on Avenue A 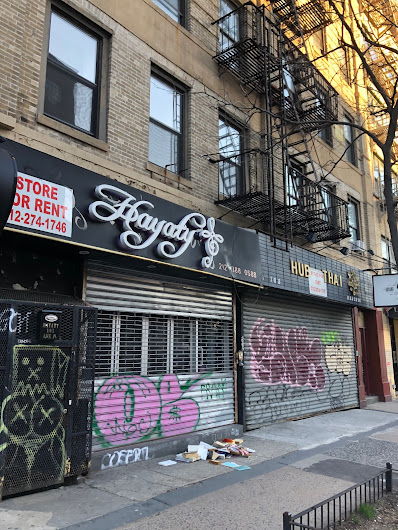 A for rent sign now hangs outside Hayaty Hookah Bar at 103 Avenue A between Sixth Street and Seventh Street, bringing an official end to the lounge.
Hayaty had not been open since the PAUSE went into effect in March 2020.
And some residents had been surprised that Hayaty was open at all following a deadly shooting outside the space in January 2020.
Early on Jan. 9, 2020, two men, identified as Earl Facey and Richard Reid, reportedly got into an argument inside the lounge. The fight escalated outside when the two men — each reportedly carrying a .22 caliber handgun — exchanged gunfire. Surveillance footage obtained by NBC 4 showed the two men "shooting at each other as they dance around a parked car," per the report, outside Hayaty.The chase ended in front of 113 Avenue A where Facey was said by police to fatally shoot Reid in the torso. Two uniformed officers who were on patrol nearby shot Facey on the northwest corner of Avenue A and Seventh Street as he walked away, refusing multiple commands to drop his weapon and lie on the ground, according to police accounts and media reports. One officer fired his weapon twice, the other one time. Facey later died at Bellevue.
Hayaty remained open until the PAUSE.
The building's other storefront, the former Thai Hub, is also for rent. Thai Hub relocated to 50 Avenue A early last month.
You'll recognize those for rent signs ... they've been up on the long-vacant southwest corner of Avenue A and Sixth Street... same landlord here... 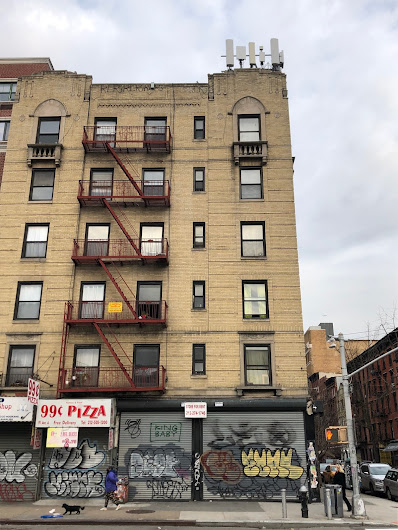 The space has been vacant ever since Benny's closed here in November 2014. Hopefully, 103 Avenue A won't sit empty for nearly seven years.
Posted by Grieve at 5:05 AM

I miss Benny's they had great burritos.

Benny's was great, and brought life to that corner. I don't get why landlords let storefronts sit empty to rot like this.

I remember attending a party at Pyramid (RIP) one Saturday night and there was a police chase that occurred after a wild commotion from this very club. Unlike The Pyramid Club, I don’t think that the Hayaty Hookah Bar will be missed...

I miss Avenue A Sushi.