J. Crew confirmed for the Bowery; opening scheduled on Sept. 13 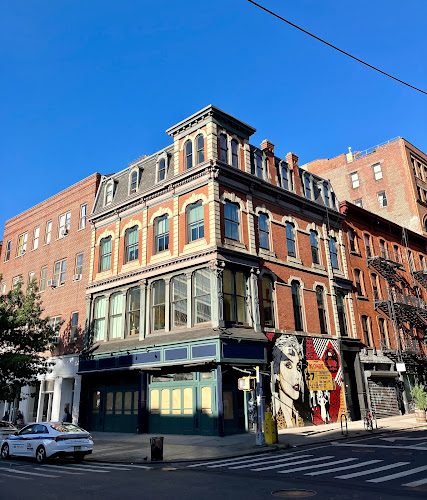 A J. Crew men's shop is opening at 316 Bowery on Sept. 13... the location arrived over the weekend on the brand's website... 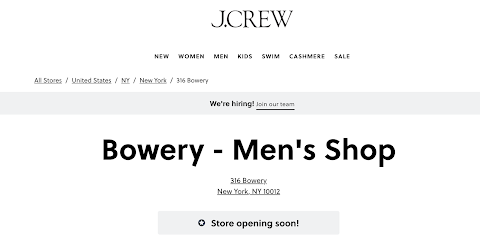 As previously reported, renovations have been quickly taking place inside the former restaurant space in recent weeks.
A Bowery Boogie informant first heard that a J. Crew was in the works, though there hadn't been anything official from the company about the new location here at Bleecker.
In addition, contractors at the scene professed to not know anything about who the tenant was. Meanwhile, other tipsters came forward, stating that this will be a JPress outpost (not true, the brand said) or a Rowing Blazers shop (also not true — they are opening at 8 Rivington St. on Thursday). 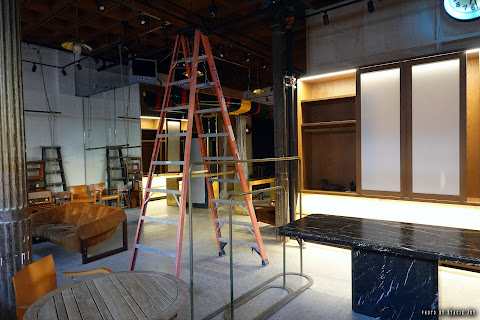 As these interior photos by EVG contributor Stacie Joy from late last week show, the shop will apparently offer a coffee service... as seen on the front counter... 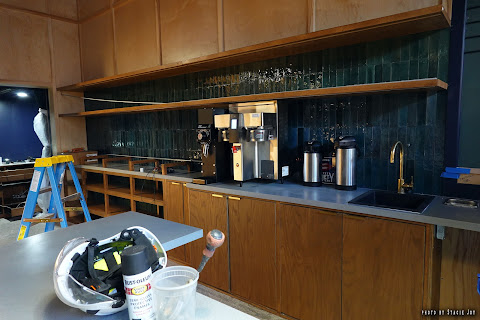 After filing for Chapter 11 in May 2020, J. Crew exited bankruptcy that fall. Per Retail Dive:

Lenders have taken over controlling ownership after a federal bankruptcy court approved J. Crew's reorganization plan. That deal left investment firm Anchorage Capital Group as the retailer's current majority owner. Kevin Ulrich, Anchorage's CEO, said in the release that his firm sees "an immense opportunity for growth and expansion at each brand," which includes the J. Crew and Madewell banners.

The company must be doing better financially — they're paying a 24/7 security detail to prevent people from tagging the 316 Bowery storefront.
There's also a J. Crew men's shop not too far away on Broadway at Broome.
The restaurant Saxon + Parole, which never reopened after the PAUSE of March 2020, was the last retail tenant in this space.
Posted by Grieve at 4:57 AM

Fine, but why? Who needs J. Crew, particularly around here? I don't get it, but good luck to them.

“”Why here” what… you want more smoke shops and cbd dispensaries?

Such an odd, random location for JCrewMens. I happen to purchase some of their clothing semi annually, but they are going to need a lot of foot traffic such as their sister location on lower fifth to pay rent and labor. I am excited for this because I won't have to travel to Flatiron for items, but I just hope they can secure this spot for some time, considering they filed for chapter 13 bankruptcy in 2020. Best of luck to them.

Overpriced yuppie rubbish and Bro-wear. The consignment shops have the best shit and ridiculously silly ass prices for quality goods. Don'y get me started on the Blondie graphic. Nothing could be a more sanitized version of punk rock on the Bowery than that lame ass thing by what's-his-name........But wow that Italianate style building really pretty fab.........One doesn't see very many mansard roofs in NYC. Also must have been very innovative at the time to have the cast iron pilasters create that large expanse of windows and at the same time support the two upper floors.

Btw is there an opening party? asking for a friend....

"yuppie rubbish and Bro-wear"? This might sound like a crazy concept but not everyone shops at thrift stores to obtain the ultimate hipster look. For those of us that don't work at record stores or coffee shops, we generally need to wear nice, previously unworn, casual work clothes for office jobs. Having some nearby large clothing stores makes it easier for some of us to shop. If you don't like it, don't shop there.

10:33- Bro, I don't work at a coffee shop or record store. Lol. In fact, if you must know, I don't work at all !.....I just happen to think it's absurd the prices people pay for rubbishy junk from China just so they can fit with their drone mates at work or wherever........but if that's your style then go for it. Very affluent people buy designer shit and maybe wear it once or twice. Or not at all. Paul Smith, Burberry, Missoni fabulous well made goods that can be had for a fraction of the retail price often in perfect condition. Have a nice day : )

XTC - so if you don’t work, J Crew is hiring. They offer competitive wages AND employee discount, so you could be in with the in crowd

Find it to be a odd location w not enough foot traffic .. it is like bankruptcy row there .. w John Varvatos and now J crew ..